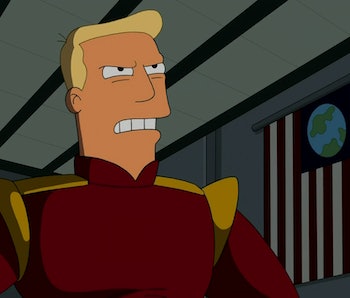 Donald Trump never served in any branch of the military, but if he had been a intergalactic space commander, his name would have been Zapp Brannigan. Futurama voice actor Billy West riled up fans on Twitter when he posted a series of Donald Trump quotes read in character as one of TV’s biggest blowhards.

For those not familiar with the lustful, boastful, idiotic starship captain, Zapp Brannigan is an old school hero who’s so caught up in the beautiful myth of his own legend that he behaves like a thoughtless, uncouth buffoon while operating under the assumption that everyone around him is as enamored of himself as he is. Zapp Brannigan is really, really, great. Many people love him, and his polls are showing really great things, probably the best things (at least on Twitter today).

Armed with that characterization, West began combing through some of Donald Trump’s most famous quotations, pulling out gems and running them through the filter of his prideful space captain. There’s the time Trump told the New York Post about his big dick:

A 15-year-old Times quote where Trump touted the hotness of the tribe of concubines he apparently keep around him at all times.

One of the best has to be Trump’s tweet from 2013 in which he happily gloated about his IQ being “one of the highest.”

This is one of those happy coincidences that no one considers until a brave soul makes the connection. Then, once it’s out, it’s impossible not to see the correlation. Two blundering buffoons gleefully tromping through the world bullying and bragging their way toward an inexplicable mythos that keeps them on top.