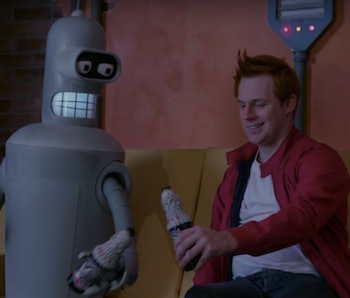 Though there were rumblings from fan-production house Cinema Relics last week about a big reveal on the horizon, the company just released the teaser of its latest project: a feature-length live-action interpretation of the beloved animated series Futurama called Fun-O-Rama. And, wow, does it look impressive.

But how do you make something that isn’t supposed to look real look really good? The approach here seems to be to embrace both the signature animation style and the hyperbolic retro-futurism vibe simultaneously. Nothing is being re-imagined here, instead, it’s just being replicated from the cartoon and transferred into a film. It’s much what Warner Bros. attempted in 1994 with the Flintstones movie – only not terrible. Instead, this teaser offers up a fun, blended reality that captures the aesthetic of the series and couples it with the wow-factor of actually seeing Fry, Leela, Bender, Amy, Professor Farnsworth, Hermes Conrad, and Zoidberg all brought arrestingly to life.

A lot of gags from Matt Groening’s satirical sci-fi classic are included here, albeit quickly. We see the robot Bender’s tendency to be fairly crass, accident-prone Amy falling down, and Leela’s general frustration with Fry, plus everyone’s dislike of the lobster-man, Zoidberg.

While we’re not sure yet exactly how these impressive visuals were accomplished, there does seem to be an amazingly devout commitment to using psychical make-up effects as well as real props and sets. Obviously, the folks at Cinema Relics didn’t put a real disembodied Richard Nixon head in a jar, but the result is close enough.

Probably the coolest thing about this project is the fact that this isn’t just a trailer for the sake of making fan film. Cinema Relics is advertising this as a”feature quality live action fan film,” meaning what we see here is only just the beginning. Futurama itself was wonderful because it was seemingly created out of a fandom for over-the-top sci-fi in general.

It’s only fitting that a fan-film of Futurama would retain its delightful arch-quirkiness. We just didn’t expect it to look this good.