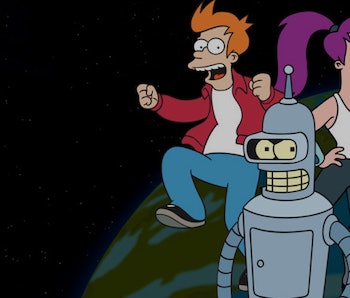 Nearly two decades ago, a new TV show from the minds of the comedy geniuses that started The Simpsons premiered on Fox. Futurama told the story of a bumbling 20th century pizza delivery boy, named Philip J. Fry, who is cryogenically frozen for a thousand years and wakes up in a very different future. Futurama was nothing if not funny over its seven-season lifespan, which saw it cancelled on Fox and resurrected on Comedy Central for a two-season double victory lap before being laid to rest for good in 2013. Throughout that hilarious vision of the future, depicted over the course of 17 years, the show also did its fair share of lampooning what it predicted would be the absurd ways we’d be living in the 31st century.

The real joke is, it won’t take too long for some of Futurama’s predictions to come true. Grab a can of Slurm and don’t get tricked by the hypnotoad. Here are nine examples of how Futurama predicted the future.

So this one is a bit of a cheat, but you can’t talk about Futurama without bowing down to the groundbreaking TV show that inadvertently birthed it. In a 1993 episode of The Simpsons entitled “The Front”, an episode of Itchy & Scratchy written by Bart and Lisa but submitted under Grandpa Simpson’s name is nominated for an award. Two comedy writer characters in the crowd lament their situation. One, who resembles eventual Futurama co-creator and Simpsons writer David X. Cohen, declares, “I’m gonna do what I’ve always dreamed of: I’m gonna write that sitcom about the sassy robot.” Futurama, the sitcom starring Bender the sassy robot, premiered six years later.

The 1999 Futurama episode “A Piece of Garbage” depicted the world facing annihilation because of an impending, giant garbage asteroid that the people of New York City had previously sent into space. The plan, to combat it by sending a new garbage asteroid at it to knock it off course, was supposed to be a spoof on the overblown Michael Bay apocalypse classic Armageddon. Instead of being a hilarious spoof, it foreshadowed NASA’s actual recommendation to send an object into space to alter the course of a 60-meter asteroid that threatened to crash into Earth in February 2013.

7. The Extent of the Ebola Pandemic

Also in “A Piece of Garbage,” Professor Farnsworth instructs the Planet Express Crew that they have to make a delivery to Ebola 9, an entire planet of people that have contracted the Ebola virus. Obviously Ebola has been studied and identified since the late 1970s, but with a little suspension of disbelief you can draw the line between Futurama’s own joke about a whole planet of Ebola sufferers and the 2014 Ebola outbreak that spread from West Africa to the United States and across the globe.

Taking one’s own life is no laughing matter, but the creators of Futurama included suicide booths in their twisted cartoon view of the future. It’s something that co-creator Matt Groening said caused Fox executives to go “from tremendous excitement” about the show “to great fear” before the show premiered. While the idea of euthanasia has been used in sci-fi before, Futurama’s own version of a euthanasia device precipitated the end-of-life clinics found throughout certain countries like Switzerland whose laws don’t forbid voluntary, assisted death.

“If a dog craps anywhere in the universe, you can bet I won’t be out of the loop,” says Professor Farnsworth, referring to his invention, the Smell-o-scope. It’s a device that appears sporadically throughout the series that allows users to plug their noses into one end to smell odors and great distances from the other. While it won’t be able to smell distant planets, the Nasal Ranger is a new tool being used by environmental health departments, water treatment plants, landfill workers, and police departments to track olfactory funkiness by measuring the amount of stinky particulate matter in the air.

One of the best long-running jokes on Futurama was its biting parody of the increasingly entertainment-driven and sensationalist media atmosphere of the 21st century. Nowhere is this more obvious than the show’s “Entertainment and Earth Invasion Tonite” segments starring the newscast odd couple Morbo and Linda van Schoonhoven.

Again, VR isn’t anything new, but Futurama was able to capitalize on its capabilities for a joke that foreshadowed commercial VR headsets like the Oculus Rift. The episode entitled “The Series Has Landed” features a gag when the gang visits an amusement park on the moon that shows a character is playing skeeball, then another is playing virtual skeeball, and another playing virtual virtual skeeball. The meta joke is funny but also portrays the kind of immersive VR experience the Oculus is attempting to introduce to a mass audience.

In Futurama’s New New York, the public subway system has been dumped in favor of a series of pneumatic tubes that riders use to instantaneously move around the city. It’s a wacky visual joke, but one that looks like the same kind of pressurized transportation system that entrepreneur Elon Musk is creating called the Hyperloop, which will eventually connect Los Angeles with the San Francisco Bay Area. The Hyperloop will allegedly allow passengers to take the LA to San Francisco trip in only 30 minutes.

Steve Harvey wasn’t the first person to mess up the Miss Universe winners. In Season 2’s episode entitled “The Lesser of Two Evils,” the gang has to make a delivery to the Miss Universe pageant being held on the planet Tova 9. Due to a faux-flirtatious mix up with pageant judge Zapp Brannigan, Leela is initially crowned Miss Universe, but the title eventually goes to a giant globular paramecium getting the crown. At least Miss Colombia didn’t have to have to hand over her award to a unicellular protozoan.

More like this
Innovation
8.8.2022 10:00 AM
A wild new plane-train hybrid could whoosh you to your destination — if it can get off the ground
By Molly Glick
Entertainment
8.10.2022 6:02 PM
Star Wars fans are mad about a "mistake" in Andor — here's why they're wrong
By Dais Johnston
Entertainment
8.1.2022 6:00 PM
WWE's Xavier Woods says esports needs to steal the best thing about wrestling
By Eric Francisco
Share: