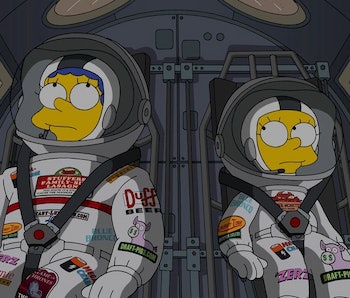 The most recent episode of The Simpsons took some chances in unexpected ways. The 16th episode of the 27th season (holy crap) “The Marge-ian Chronicles” opens with an entire act about Homer and Bart stealing eggs from neighbor Flanders. It’s a pretty flat storyline that, mostly, made me reflect on how I’m eating too many eggs — it was boring enough that I worried about my diet. And then the episode shifts completely, and enters some new, challenging territory with a surprise bit of guest casting.

The egg theft B-story does a sharp right-turn, and suddenly, the Simpson family find themselves in the corporate home of Exploration Incorporated, an idealistic, if not thoroughly scientific, research group intending to put a human colony on Mars. They’re backed by corporate sponsorships from online sports-betting websites and Fig Newton knock offs, but that’s how science and capitalism co-exist these days. At first the bit seems almost too silly for satire, but once you see the family covered head to toe in ad placement you’ll notice it’s no different than standard NASCAR outfitting.

This brings us to the show’s excellent guest voices: The Best Show partners Tom Scharpling and Jon Wurster, who play the flawed, but enthusiastic Elon Musks of Exploration Incorporated. That’s a huge deal to the very specific die-hard audience who makes up their following — which, in a geek culture Venn Diagram, is almost a total overlap. It’s also a funny issue of timing, since Scharpling made a very public pitch to replace Harry Shearer when it seemed like the actor was leaving.

Anyhow, the plan to kickstart human life on Mars leads to some trials and tests that most of Springfield volunteers for. Some are looking for a new start, others to escape personal debt, but Lisa becomes convinced it is her life’s mission. To dissuade her, the entire family decides to support the decision, hoping to prove it isn’t really what she wants to do.

The show’s astronaut storyline references the one time Homer was in this position before, back in the classic episode “Deep Space Homer” which Nathan Rabin once called “one of the biggest, most outlandish and preposterous premises in the history of The Simpsons”. That episode went for crazypants broke — this episode does not. What follows is a series of bait-and-switches that threaten to send only Marge and Lisa to Mars as the timetable is drastically altered and the rest of the astronaut candidates bail.

In an otherwise “serviceable” episode, this is the heart and soul. Lisa wants Mars to be her home because she’s both an outsider and a leader, who would thrive on the red sands of another world. But her mother, who she’s locked in battle against, represents a mirrored version of her same skills and morals. When it turns out Marge both excels at space work and surprisingly enjoys it, she delivers one of the most painfully beautiful lines in recent Simpsons memory:

“I know we’re just here to fake-support our daughter, but you’re pretty good at this space junk. Moms spend their whole lives obsessing over unlikely catastrophes. In space, that’s what you’re supposed to do.”

If the whole episode could have been this daring and honest, it would be hailed as an instant classic. Instead, we’re treated to a bit of Scharpling/Wurster improv in an extended credit sequence, and that’s just fine I guess. Just a let down that in the episode that promised to shoot for the stars, we never left the launch pad.