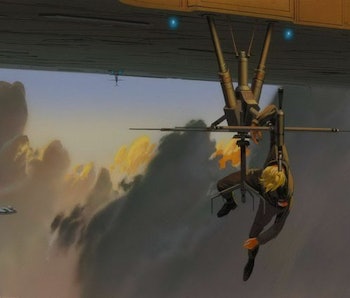 Han Solo is dead. His dark side-loving son Kylo Ren stabbed him right through the chest with a lightsaber, which in the Star Wars universe usually proves fatal. But some fans aren’t convinced: They think that maybe, just maybe, a lightsaber stab and a fall into a bottomless pit on the Starkiller Base are only flesh wounds, and Han is still alive.

When Sherlock Holmes tumbled into a similar abyss, many fans and scholars loved pointing out that the body of the detective was never found. The same is true of Han Solo: We’re meant to believe that if the lightsaber stab didn’t kill Han, then the fall from that catwalk would finish the job. But people have survived great falls in Star Wars before, specifically Luke Skywalker in The Empire Strikes Back. After getting his hand sliced off by Darth Vader, Luke fell/jumped into an abyss in Cloud City only to find himself hanging on a weather vane on the bottom of the floating station. From there, he was picked up by the Millennium Falcon after Force-reaching out to Leia, and he lived to fight — and complain — another day.

Since way back in December of last year, fans have been postulating ways for Han to escape his grisly murder in The Force Awakens, and now the belief that Han is alive is gaining steam again.

Assuming Han didn’t bleed to death from the stab wound, it’s conceivable that he grabbed on to some kind of outcropping as he fell. Sure, he looks pretty lifeless during that tumble, but Han Solo has gotten out of some scrapes before. The big question is: Who could have picked Han up before Starkiller Base was destroyed? Assuming Han knew he was headed into big trouble before the Falcon went to Starkiller Base, it’s possible he called up Lando and asked him to lurk around the quadrant just in case he needed to make a fast getaway. Lando grabs Han, gets a medical droid on that wound, and bam: Han is back in action.

It doesn’t seem likely that an unseen Lando would lead to Han’s resurrection in Star Wars: Episode VIII, but that doesn’t mean we can entirely rule it out, either.