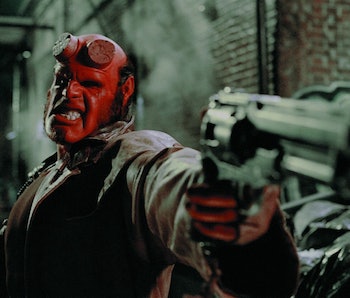 Ron Perlman wants Hellboy 3, and if Hell is merciful, he might end up getting one. As a creator-driven project from auteur director Guillermo del Toro, Hellboy could follow the steps of Christopher Nolan’s Dark Knight trilogy and end on its own terms.

Hellboy and its sequel, Hellboy 2: The Golden Army, were adaptations of the popular Dark Horse comic from creator Mike Mignola. The story followed a demon, summoned to Earth by occult Nazis and raised by Americans as he fought against evil. The character spawned multiple comic books, one-shots, and crossovers. Both films were directed by Guillermo del Toro, who infused the series with his trademark love of creatures and Gothic atmosphere. Unlike some modern superhero films, the two Hellboy films contained the unmistakable mark of a horror film director, making them a breath of fresh . Despite repeated admissions from del Toro that Hellboy 3 probably won’t happen, Hellboy star Ron Perlman hasn’t given up.

In a tweet posted eight years after the last Hellboy movie, Perlman continues to fan the flames for a third Hellboy film, and if studios wanted to buck the trend of modern superhero films, they would fund a conclusive third film.

Hellboy recently finished a critically-acclaimed comic run in which he was killed and forced to wander through Hell. Just like Christopher Nolan’s Dark Knight films, which refused to join any larger cinematic universe in favor of a self-contained trilogy, Hellboy makes a strong case for a similar approach. As a strongly individualistic film from a creative team with a singular vision, Hellboy isn’t suited for a long-running franchise comprised of multiple films and crossovers.

Instead, del Toro and Perlman should be given a shot at taking Hellboy out with the bang he deserves, allowing the character’s film story to end at the hands of a director who treated the creature with such love, and an actor who embodied him with perfect physical and emotional intensity.

More like this
Culture
6.17.2022 11:31 AM
45 years ago, the worst Exorcist sequel almost killed the franchise forever
By Jon O'Brien
Culture
6.29.2022 10:00 AM
6 years ago, Marvel released its most incoherent sequel ever
By Graeme McMillan
Entertainment
6.24.2022 11:15 AM
Behind the scenes at “Herogasm,” The Boys’ most NSFW episode ever
By Aaron Pruner and Jake Kleinman
Related Tags
Share: