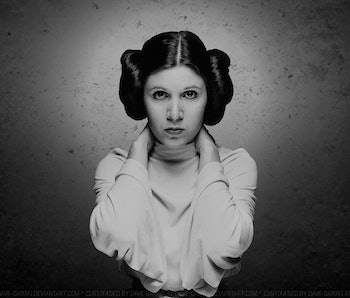 Leia Organa — Rebellion princess and Resistance general — has a backstory which could possibly be the focus of the newly announced Star Wars anthology film.

The former senator from Alderaan and daughter of Anakin Skywalker had a kickass and complicated life before the events of Star Wars: A New Hope, all of which could easily be chronicled in the 2020 anthology film. And if you think about it, a standalone movie about Leia makes perfect sense, not only with the events in the other two anthology films — Rogue One and the young Han Solo movie — but also with the conclusion of the trilogy begun by The Force Awakens.

The wealth of material to do a story about Princess Leia before A New Hope is exhaustive. The original 1981 Star Wars radio drama depicts Leia fighting for the Rebellion as both a diplomat and laser-blaster-wielding badass before she is captured by Darth Vader. Here, we have a microcosm for what stories about Leia could look like in a standalone movie. While Rogue One will show the harsh realities of war with the Galactic Empire, and the Han Solo film can depict the criminal underbelly of the galaxy, a movie about Leia could delve into the corrupt political infrastructure and how Leia, like her mother before her, strove to reform the Empire from within.

Sure, a lot of Star Wars fans would doubtlessly be very nervous about a prequel featuring space politics. But, seeing how Leia navigated her offical position as senator and translated it into her role as a freedom fighter could be juicy. In fact, the second season of Star Wars: Rebels already gave us a glimpse of Leia’s crazy-like-a-fox rebellious schemes in the the episode “A Princess on Lothal.”

Thematically, a standalone Leia movie also makes sense considering this 2020 film would release after the conclusion of the the current “regular” trilogy. As we see the sun set on General Leia, Rey, and Finn, it might be nice to revisit the roots of the Rebellion once more.

These anthology films are supposedly all about giving us backstory into stuff not part of the Skywalker story, but a young Han Solo movie sort of throws that out the window since he ends up having a kid with someone from that family. Plus, a standalone movie about Leia would be about the time before she knew she was connected to a larger legacy, which would make it a perfect companion piece to a young Han Solo movie. If you’re gonna recast young Han, why not young Leia too? Doing a prequel movie about Luke Skywalker would be boring; we know he was bored on Tatooine. But the most interesting person from the classic trilogy other than Han Solo is easily Leia.