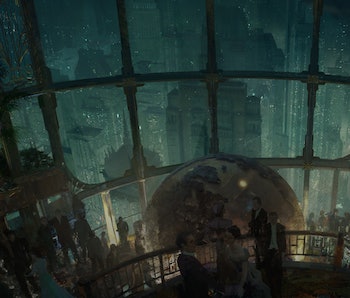 As BioShock continues fueling serious discussion about video games, it’s becoming clear that its legacy is changing. While not immune to critical reevaluation, the one thing from the game that’ll withstand the test of time is the fictional city beneath the sea: Rapture.

Rapture is far from the first dystopian city in science fiction, but no other location came so close to feeling so complete and confident right out of the gate. Part of that comes from design choices made by Creative Director Ken Levine, while others came from the city’s design itself.

Levine opposed including cutscenes, so the city was never framed through a cinematic lens. This hindered Rapture as a location that can be quickly understood, but on the other hand, it meant Rapture’s strength came from being explored. Limiting Rapture to only what the player could see at any given moment made the location a fascinating mystery. The confidence Irrational Games had in their fictional, Objectivist paradise proved to be far more powerful than any of the game’s clever narrative twists or epic storytelling. Rapture is the one constant between all three BioShock games for good reason.

Founded by Andrew Ryan, Rapture’s construction finalized in alternate-history 1951 off the coast of Reykjavik, Iceland. Rapture was dreamed as a means to escape what Ryan perceived as the ills of American society. “No Gods or Kings, Only Man” read Rapture’s entrance as it opened to a gulch that fostered freethinking among likeminded individuals. Free from the constraints of government, organized religion, and communists, Rapture was Ayn Rand’s ideal society on steroids.

Rapture was designed to look like Hugh Ferriss’s literal wet dream. The Art Deco architecture alone would put the city in a league of its own. However, the conscious decision to incorporate the ocean into its surroundings gives Rapture a second life. Throughout the BioShock trilogy, players experience Rapture at both its prime and its ruined aftermath. In both cases, Rapture is stunning.

In Burial at Sea, Rapture is depicted at its glorious height, with gold-plated towers, lush interiors, and staggering opulence. After it devolves into ruined wreckage following a civil war, Rapture becomes a Lovecraftian hellscape, bathed in an eerie, green gloaming while overrun by mutated Rapture denizens. Rapture is breathtaking either way because the foundations of the city are so strong as to be able to become multiple things given the situation.

Interestingly enough, Levine and lead artist Shawn Robertson revealed in BioShock: The Collection’s special feature interview that the location was conceived of before the Ayn Rand-inspired narrative. This explains why the location can function so well even without an ideological framework in which to process it. Whether it’s under the Objectivist aspirations of Andrew Ryan, or the Collectivist mentality of Dr. Sofia Lamb from BioShock 2, Rapture remains a perfect cypher for ambitious ideas too strong for normal society.

This is because Rapture isn’t a normal society.

Levine and Robertson realized that in order for the city to make sense, there needed to be a reason for fictional immigrants to want to go there. In that, Levine and Ryan succeeded. When Ryan tells Jack that in Rapture he can keep the sweat from his brow without worrying about the government or god, Ryan was also pitching the player on why Rapture was so great.

An infamous story recounted through various articles and interviews is the torturous QA phase BioShock went through before release. Players heavily criticized the game on everything from the characters to the setting. The latter strikes me as completely fair given how difficult it is to navigate through Rapture, even after multiple playthroughs. But Irrational’s refusal to compromise with the city’s labyrinthine structure makes traversing it all the more satisfying.

Rapture isn’t nearly as big as some of today’s modern open-world games, and revisiting the city now reveals clever tricks from the developers that make the city appear bigger than it actually is. But throughout it all, Rapture never feels like a level; Rapture feels like a living, breathing city. All the qualities that make it so engaging are the same reasons why Irrational could never bear to leave the location behind. Each game in the trilogy visits Rapture, and it might just be the only thing that remains in our memories of it in another 10 years.