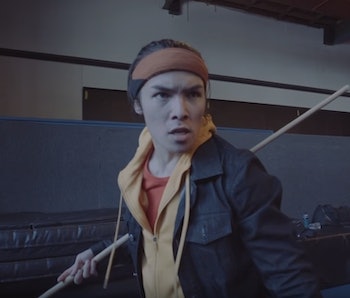 Ryan Potter, an actor and stuntman best known for providing the voice of main character Hiro in Disney’s Big Hero 6, just called out Batman himself. Potter published a YouTube video audition to play Robin in the upcoming Batman solo film, showing off his combat skills and demonstrating that Robin can actually look cool.

The action reel quickly surpassed the 500,000 viewer mark which is impressive considering the choreographed action sequence was designed in three-and-a-half hours. Potter is the latest actor to get swept up in a Twitter campaign to fan-cast roles for upcoming superhero movies. Donald Glover of Community and Atlanta was famously promoted for the role of Spider-Man by fans. That role eventually went to Andrew Garfield in the failed Sony Amazing Spider-Man film series. Glover did end up getting a role in the new joint-Marvel production of Spider-Man: Homecoming starring Tom Holland.

Potter first latched onto the notion after fans suggested his suitability for a DC superhero role. While names like Batman’s first sidekick, Dick Grayson, was mentioned, Potter realized that he looked closer to Tim Drake, the third Robin. While ideally he wishes he could play Bruce Wayne’s half-Asian son-turned-Robin, Damien Wayne, he believes that portraying a canonically non-Asian character as an Asian actor will help further film’s diversity discussion.

As a half-Japanese, half-Caucasian actor, Potter recalls how he found himself in too many auditions where he was too much of the either to land the role. “This was really just to start that dialogue, and it’s clearly done so,” Potter says.

There are only two roadblock to Potter’s Tim Drake aspirations, neither being the fault of the actor himself. First, the solo Batman film from Ben Affleck is still in-development and there’s no confirmation which Robin, if any, will be cast for the role. Second, Tim Drake was recently “removed” from the DC continuity as of Batman Detective Comics #940, in which Drake seemingly was killed in a suicide mission. While the comics and films don’t share a continuity, recent looks at how Marvel runs their film and comic operations reveal that comic publishers consciously try to unite their two arms for some sense of cohesion. Just look at how Marvel heavily promoted their Inhumans line of comics in preparation for a now uncertain Inhumans movie.

Still, Ryan Potter’s audition reel is certainly a visible bit of viral promotion, and his moves very much echo the gritty, street-style of fighting Batman and Robin are known for within Gotham City. At the very least, Potter is known at DC with fans actively tweeting at Ben Affleck and DC Films head Geoff Johns about Potter’s video.