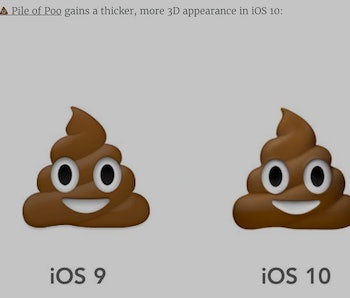 Apple’s new iOS 10 brought a host of sweeping changes (and, yes some sliding changes) to everyone’s iPhones and iPads, but perhaps the most monumental update is that the poo emoji, 💩, looks subtly different.

Yes, iOS 10 updated dozens of emoji and added some important new ones to the keyboard. Emojipedia — an invaluable resource — documented all the differences and added emoji that came with the update.

The most important update is Apple’s continued push for gender parity when it comes to emoji. As of iOS 10, pretty much every gendered emoji has both male and female versions. The means Information Desk Person (💁) now has a male counterpart, and the Dancing Women With Bunny Ears (👯) have gender-swapped doubles as well.

The update also introduces single parent families featuring single emoji moms and single emoji dads with either one or two children. A rainbow pride flag has also been added.

One of the most controversial changes is the switch from a realistic emoji gun (🔫) to a toy green water pistol. Apple made the switch in the wake of legal cases where courts had interpreted the emoji as a threat, and a campaign by the organization #DisarmTheiPhone. I, personally, am a big proponent of gun control, but this seems like an interesting choice. The Unicode Consortium, the agency that creates emoji (though it does not design the final art that various platforms use), meant for them to be a universal language. For better or worse, guns are a part of life, and if we’re to communicate with pictures, we should have accurate tools.

Plus, imagine the possibilities when you text your friend, who has an Android, that you’re “super stoked for the picnic” and an emoji of the water gun you’re going to bring for the water fight. Unless Android follows Apple’s lead, your friend is going to interpret that very differently.

A bunch of emoji got subtle redesigns. Generally, the faces have taken on a more detailed appearance, and are a little sharper and a little less glossy. Emojipedia said the change makes the emoji “less Simpsons and more Pixar.”

There were some miscellaneous changes as well. The Runner (🏃) is wearing shorts instead of jeans, the Man With Turban (👳) has a beard now, Pouting Cat Face (😾) is no longer viewed in profile, and a Grinning Face that looks very different across platforms (😁) has been changed to be more consistent.

They’re not wrong, folks. Check out all the changes here.

More like this
Gear
Jan. 24, 2023
How to use FaceTime's magic eye contact feature in iOS
By Alyson Velati
Gear
Jan. 24, 2023
Arc browser for iPhone is bringing skeuomorphism back (kind of)
By Raymond Wong
Innovation
Jan. 28, 2023
The 5 best mini projectors for iPhones
By Debbie Lee
LEARN SOMETHING NEW EVERY DAY.
Related Tags
Share: