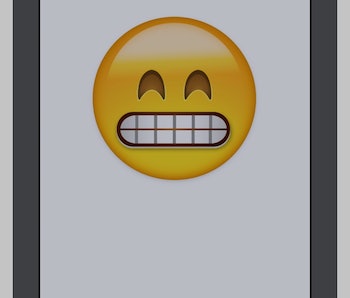 Picking the right emoji is an art form because you’ve already decided to ignore the clearest form of communication — words. Do you respond to a comment with the cold dead eyes and blank smile of the poop emoji? If you ghost someone with a smiling ghost, does it make it less terrible?

A new study from the GroupLens Research Lab at the University of Minnesota argues that because emojis look different on varying platforms (Apple vs. Twitter vs. Android vs. Facebook, etc.), the receiver may interpret the visual in a contrasting way from the sender.

Further complicating the matter, the researchers found that people tend to interpret the meanings of emoji differently even if they’re looking at the same icon. The paper is free to read online now and will be presented in May at the AAI Conference on Web and Social Media in Cologne, Germany.

“We show this problem [different visuals] can cause people to misinterpret the emotion and the meaning of emoji-based communication,” writes co-author Hannah Miller.

“One finding that really surprised us is that a good deal of the potential for miscommunication may come from different interpretations of the exact same emoji rendering.”

To study the effects of “emoji font” diversity, Miller and her team sent online surveys to 334 participants recruited through the Amazon Mechanical Turk program. They showed the test subjects how 22 of the most popular anthropomorphic emoji were rendered across five platforms — Google, Samsung, Apple, Microsoft, and LG — and quizzed them on what they considered the sentiment and semantic interpretations of the emoji. The surveys included questions like “In 10 words or less, what would you think this emoji means?” and “Fill in the blank: I would use this emoji to —.”

The researchers found that people had conflicted interpretations of emoji’s sentiment and semantic (the perceived definition) meanings, whether or not they were looking at a different platforms illustration. But to be clear, they found that the lack of conclusive interpretation was wider when people looked at cross-platform emojis. The “grinning face with smiling eyes” was particularly a problem — Apple’s offers a clear grimace while the Microsoft, Samsung, LG, and Google portrayed a decidedly chipper face.

Two other emojis that were frequently interpreted differently across platforms were the “sleeping face” in regards to sentiment and these guys: 🙌.