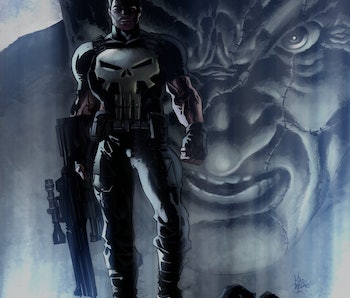 Jon Bernthal’s Frank Castle is getting his own Netflix series after dominating Season 2 of Marvel’s Daredevil. Ben Barnes, known for Prince Caspian in The Chronicles of Narnia, has been cast as Bobby Saint, a crime prodigy last played by James Carpinello in the 2004 movie The Punisher. Although Bobby and his father Howard Saint (played by John Travolta) were movie characters with no comic book origins, it’s possible that Bernthal’s Punisher might square off against the super-villain Jigsaw, one of the character’s most famous arch-enemies.

In the 2005 game The Punisher based on the film and a few Punisher comics, Howard’s son — whose name was John — was Jigsaw, the game’s final boss. A longtime enemy of Punisher’s, Jigsaw is Billy Russo in the comics, a New York hitman whose pretty looks earned him the nickname “the Beaut” (No “y”). After gunning down Russo’s associates, Punisher tosses Russo through a glass window, keeping him alive as a warning to the underworld. With his face horribly scarred, Russo adopts the name “Jigsaw” and seeks revenge against Castle.

That a forgotten third-person shooter hints the identity of a casting news from TVLine is admittedly a stretch, but there’s no suitable enemy for the Punisher in his first Netflix season like Jigsaw. Because it’s Netflix, the show could go all-out with Jigsaw’s gross scarring while making him a formidable threat at the same time. Dominic West from The Wire also played Jigsaw in the unrelated 2008 film Punisher: War Zone, whose name was slightly changed to Billy Russoti. So, he’s got a history of name changes. If only he had a history with facelifts.

Netflix and Marvel’s Punisher does not yet have a premiere date.