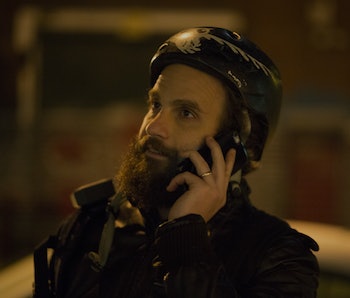 A web series upgrading to a “real” television program seems almost commonplace now, but that doesn’t take away from how special High Maintenance feels as it makes its official HBO debut tonight. The charming, weird series of short New York City-centric vignettes has been elongated to sitcom-length, but the show still manages to retain its unique quality.

What made High Maintenance the web series resonate with so many viewers was its commitment to characters, to New York City, and to being a story about the people who smoked weed — not the action (or results) of smoking weed. Sure, being high is a part of the show (The Guy regularly smokes with his customers; sometimes the story stays with the stoned characters after The Guy’s delivery is complete) but being high is not the crux of the show.

Instead, the web series consisted of short little peeks into the unique lives of New Yorkers without becoming too precious or veering too much into the obnoxiousness of “Only in New York!” — because, well, people are getting high everywhere in the world — although it makes great use of its setting, especially as The Guy rides down familiar streets (and runs into familiar television productions). The HBO series takes everything that worked on the web and escalates it (thanks to a bigger budget) without losing anything in the process.

There are differences, of course, such as the episode length, but this just means that a single episode can follow multiple characters and stories that are tangentially related to each other. It also gives the show more breathing room and more space to experiment; the series’ stand-out episode, “Gatsby,” takes place from a dog’s perspective and could just be the most inventive half-hour of television this fall. “Gatsby” showcases masterful directing; get high enough and you’ll believe that this dog is a seasoned actor who knows his precise blocking and his character’s motivations.

The other main difference is that the extra length means we get some more information about our mysterious weed dealer. It’s not too dramatic after all, we still don’t know his name — but the glimpses into his life add to the narrative without taking the focus away from everyone else. For the most part, The Guy remains our conduit, the means through which we meet everyone else. He is still very much a reactionary character, preferring to respond to customers with wide-eyes or a well-placed “um…” that allows the people around him to fill the silences with oversharing conversation. The Guy sometimes disappears for long chunks at a time, allowing the narrative to switch to a man exploring the simple pleasures of stoned giggles in a sex shop, an immigrant couple collecting cans and bottles, or a teenage girl in pajamas and a winter coat sneaking a cigarette on the roof of her stifled apartment building.

Yet, maybe the greatest feat of High Maintenance is its depiction of both the awkwardness and the intimacy between a person and their drug dealer; small talk feels just that — too small — but the shared comfort of being stoned, of being partners in an illegal activity, can open up the floodgates for sharing personal details. An episode that could go wild with the idea of day raves and adult day camp turns into a rumination on a complex father/daughter relationship as a retired stoner opens up to The Guy during a delivery. In *High Maintenance”, the cordial delivery weed dealer replaces the surly bartender as your surrogate therapist — and he’s a lot more chill.