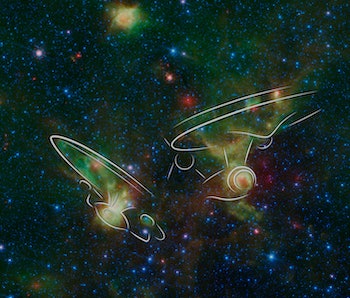 Maybe it’s a bit of a stretch, but less of one than basically all of the major constellations out there and — for that matter — definitely more believable than the last time you claimed to see a bunny in a fluffy white cloud. The phenomenon of conjuring familiar patterns from random noise is called pareidolia, and without it, we wouldn’t have astrological signs or Rorschach tests.

The nebulae themselves are located within the Milky Way galaxy, and take the official designations IRAS 19340+2016 and IRAS19343+2026. These are regions of star formation, where stellar gas and is accumulating towards the eventual birth of a new celestial object. In visible light, these nebulae would be obscured by the clouds of debris, but telescopes like Spitzer can peer within by analyzing wavelengths of infrared light and representing them in different colors.

It’s likely that many current NASA employees credit their love of space to science fiction, and many of them will be reflecting on that progeny on this significant anniversary today. It should be no surprise, then, that some of them are seeing visions of the Enterprise written in space dust, as they contemplate their own mission to boldly go where no one has gone before.

And admit it, once you see it, it’s pretty hard to unsee.