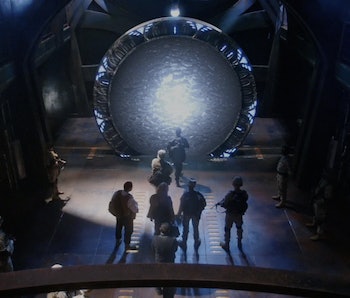 Good science fiction strikes a delicate balance — it has to be true enough to real science to be believable, yet bend the rules enough to allow for fabulous adventures and gripping plots.

Mika McKinnon is an expert on riding that line. Trained in astronomy, planetary science, and geoscience, McKinnon is a Master of Disaster (her actual degree title) who now spends her time communicating science in different ways to different audiences. One of her many avatars is as a scientific advisor to writers of science fiction; her most prominent role was on the set of Stargate Atlantis and Stargate Universe, where she had a hand in scripting, props, and background details that aimed for as much real-world scientific accuracy as possible.

“You only get so much plausibility,” she says. “If you waste that suspension of disbelief on things like the gun that had infinite ammo, or jumping off a 30-storey building and walking away without a scratch, then you don’t have enough left over for the things that are left over for the things that are important to your plot.” Inverse talked to McKinnon about how the conflict between science and fiction is tamed, being a huge sci-fi geek, and why Star Trek can still be smart in 2016.

What’s your level of sci-fi geekery?

I am an unrepentant sci-fi junkie. I watch so much sci-fi. When I was working on my thesis I literally watched every single Star Trek of every single series, back to back to back to back to back, while running my landslide models. I have over a million data points and they were all acquired watching Star Trek. One of my favorite hobbies is to watch really bad, B-grade sci-fi and challenge myself to find ways to justify the terrible science that’s in it. So instead of nitpicking and pulling it apart — try and be like, ‘OK, so what rules could we put in this universe to make this work? How could this happen? How could things be different, that we get this result? How could Sharknado be a thing? Let me see … I can come up with something here. So, if we have really strong tornados … They’re actually sentient aliens…’ It’s a silly game, but I have a lot of fun with it.

I guess that’s what separates real science from sci-fi science, no?

Yeah, I find that scientists are very good at pointing out all the flaws in a show, at nitpicking all the things that they get wrong. It is much harder to come up with ways to make the story work anyway. To find ways for the science to support what they’re doing, anyway. My philosophy is, I will never tell a writer or a director they can’t do something with their story. My job is to find a way to make it work — to make it plausible. And that involves doing a lot of things that you would never do in real science. I’ve fed the energy of a solar flare into a black hole — you’d never do that in academics, there’s no reason to. But there’s no reason you can’t do it. And if you do it — then here’s what the consequences would be. And that’s where the playing comes. It’s a super fun field to take all of these things you learn in classrooms and you learn from books that you’re used to using so seriously, and getting to play and goof around with them, and do something that is unusual and creative, with all this very serious science.

So what do you do when you’re handed a plot point that’s basically impossible?

There was an episode of Stargate where they needed to have something in space kill everybody every 22 minutes. Their original thought was that this would be a really slow-moving pulsar. Well, if you have a pulsar that’s rotating that slowly, it’s going to generate an electromagnetic field about the same strength as if somebody was holding fridge magnets and doing cartwheels. Sure — there’s technically a field, but it’s certainly not going to kill anybody. So I had to come up with an astronomical big baddy that would fit in their plot, but was more deadly than their original idea.

Do scientists watch sci-fi differently than the rest of us?

I think that scientists get very cranky when they see basic mistakes in the field of science they’re familiar with. Doctors hate seeing X-rays upside down. Physicists can’t understand why the genius scientist is stumped by f=ma. When you’re familiar with something and you see something that is obviously wrong, it bugs you, and it throws you out of the moment. But having good science in there makes everybody happier. You don’t need to be a huge science nerd to appreciate it.

I do conventions and speaking engagements, and it’s this opportunity to interact with fans about this show that they love. And so many people come up to me and say — they almost apologize — and say ‘I don’t really understand science.’ And I start talking to them, and it turns out they really understand it in the context of their show — they pay attention to the details, they know all the rules for how these things work, they just don’t realize that these rules are real, those rules are actually how scientists think of the world. So it’s really fun getting to engage on that level. That’s one of the more rewarding things, is being like, ‘No, you actually do like science, you just don’t like science classes.’

It must be hard for the untrained eye to separate the real science from the fiction, though.

How does that work?

So, there was one episode of Stargate that involved a bunch of cryptography, a bunch of hidden code. For this episode, I did a lot of background easter eggs, in code, that gave information, that gave hints to future episodes in it. When the episode aired, this combination of the capacity to freeze-frame and screenshot a background element, and then discuss it on fan forums has completely changed how people view TV. So they freeze-frame it, they discuss it, and they start noticing that there’s recurring patterns, they start noticing that this symbol keeps popping up, and they start trying to pull it apart. And suddenly this extra game to play for the episode of trying to solve the riddle that I’ve left for them. And it’s people who aren’t cryptographers, it’s people who are just fans of the show, and want to figure out this thing that we left them.

They’re doing the work of scientists, but in a fictional world?

Chris Pine was in the news recently for saying there’s no market for a cerebral Star Trek in 2016. Do you agree?

I thoroughly disagree with that. I think people love to get into their stories. I think that people love to debate their stories. And yes, we love eye candy, and visual effects are amazing and getting better all the time, but our demands as a viewing audience are also increasing. You can’t get away anymore with having your genius scientist fail high school physics and be stumped by e=mc2. You can’t just do that anymore. You need to have real, complex problems for them to solve, and yeah you’re still going to use technobabble, and you’re still going to use your deus ex machina, and you’re still going to do all these basic storytelling techniques to get there, but you need to have a problem worth solving. And we’re getting pickier and pickier about those problems being worth solving.

Science fiction is a really good way to subversively increase science literacy, and because of how relatively easy and relatively inexpensive it is to hire a scientist, it’s turned out to be a very good way of easy value added. Producers and writers and directors can get quite a bit of talk, quite a bit of buzz, by having real science in their shows. And scientists are one of the cheapest things in movie production.

More like this
Science
5.6.2022 11:30 AM
The best sci-fi thriller on Netflix reveals a provocative spin on time travel
By Tara Yarlagadda
Entertainment
5.10.2022 10:00 AM
20 years ago, H.G. Wells’ great-grandson reimagined a time travel classic
By Jeff Spry
Entertainment
5.9.2022 12:00 PM
25 years ago, Bruce Willis made the most divisive sci-fi movie ever
By Jon O'Brien
Related Tags
Share: