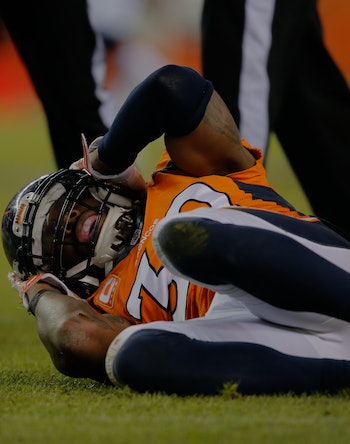 With every new NFL season comes the same harrowing decision for football players who love their sport but realize the very real risks it poses: Is it worth it?

Chronic traumatic encephalopathy — CTE — is the devastating brain injury that’s affected 96 percent of ex-players. It’s an increasingly urgent threat, both to players and the league itself.

But it doesn’t have to be: An expanding library of research has revealed that cannabidiol, a brain-protecting compound in marijuana, could make those difficult decisions moot. And while it’s understandable that the NFL would want to avoid being roped in with stoner culture, there’s a strain of cannabis that promises to circumvent such associations — if the league allows it.

Here’s where Charlotte’s Web comes in.

Charlotte’s Web is a strain of marijuana named after Charlotte, a little girl whose uncontrollable seizures were purportedly “cured” by extracts from a marijuana strain containing low levels of THC — the psychoactive chemical that gets users high — and higher-than-normal levels in cannabidiol, or CBD, a potent anti-inflammatory and potential brain protector. CBD, notably, will not get you stoned.

The Charlotte’s Web strain is currently grown by the Stanley Brothers, owners of CW Hemp in Colorado, a company that produces therapeutic tinctures from the strong — though psychoactively dormant — strain. Though the strain was initially developed for the treatment of seizures, it wasn’t long before football players, fearing the psychological ravages of CTE, began to take notice of its protective potential.

The potential neuroprotective benefits of marijuana are no secret: In fact, NFL players like ex-offensive tackle Eugene Monroe have been dismissed from their teams for publicly lauding its potential to prevent — and perhaps even treat — CTE. As the Vice series Weediquette revealed in a recent episode titled “Gridiron Ganja,” Monroe was released by the Baltimore Ravens in June for advocating for marijuana treatment. While he was offered positions on the lineups of big teams like the New York Giants, Monroe opted to retire. The risks of CTE — memory loss, aggression, depression, suicide, and dementia, to name a few — were simply too great. Now, he joins players such as Tennessee Titans linebacker Derrick Morgan and former quarterback Jake Plummer in a campaign to convince the NFL to relax its stance on pot — in all its forms and components — and support medical marijuana research, especially as it applies to CTE.

The research on CBD’s neuroprotective ability is promising, though much of it is stuck in its infancy. The Controlled Substances Act of 1970 classifies marijuana as a Schedule 1 drug and continues to make research on its derivatives extremely difficult for American researchers. Much of the ongoing research, however, corroborates the claims of a patent filed back in 2003: U.S. Patent #6630507 described CBD as a “useful molecule with “particular application as neuroprotectants, for example, in limiting neurological damage following ischemic insults, such as stroke and trauma, or in the treatment of neurodegenerative diseases, such as Alzheimer’s disease, Parkinson’s disease and HIV dementia.” That umbrella of devastating brain conditions could cover CTE, too.

Today, much of the research on treating CTE with CBD shows that the marijuana compound can prevent a protein known as tau — which, notably, also causes Alzheimer’s from building up in the brain after a head injury. Tau accumulation is actually what’s thought to lead to the death of neurons, and subsequent neurological issues, in CTE. Many of the studies point out that CBD is not psychoactive. A review in the journal Behavioral Pharmacology published this year argues that CBD’s neuroprotective, antioxidant, and anti-inflammatory effects made it an “interesting” drug to explore for Alzheimer’s treatment, “especially as it lacks psychoactive or cognition-impairing properties.” Another study, published in 2014 in the journal Psychopharmacology, showed that chronic treatment with CBD could be therapeutic for certain cognitive issues in mice with tau buildup — without any of the psychoactive or anxiety-related effects typically associated with CBD.

It’ll take more than animal studies to convince the notoriously stubborn NFL to consider therapeutic CBD, however. Researchers at Johns Hopkins University and at the University of Pennsylvania, funded in part by an $80,000 private donation from Monroe, are currently doing preliminary tests on the impact of cannabinoid use in retired and current NFL players.

Still, regardless of whether the research goes on to justify its use, science won’t be what convinces the NFL to accept CBD. Charlotte’s Web, despite its lack of psychoactive effects, is still a strain of marijuana. What CBD needs is a PR miracle, one that can isolate the compound from the drug, much like morphine was ultimately extracted from opium.

As the dangers of CTE continue to play starring roles in exposés such as Will Smith’s Concussion and Frontline’s inflammatory documentary on the concussion crisis wracking the NFL, the league’s unwillingness to soften its stance on CBD only grows more tangled, more frustrating — and more dangerous.