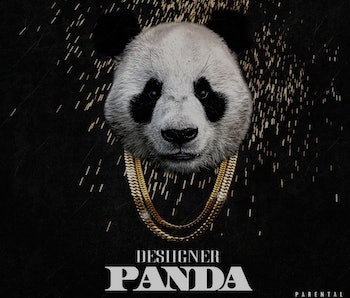 On his breakout hit “Panda,” rapper and alleged wildlife benefactor Desiigner worms his way into listeners’ ears with a single word.

“Panda, Panda/Panda, Panda, Panda, Panda, Panda,” he repeats, as if the song’s hypnotic refrain was a spell. It has certainly had that effect: As news broke today that giant pandas are no longer endangered, Desiigner mysteriously managed to convince the internet that he was single-handedly responsible for saving the beloved species.

Which, upon closer inspection of the song’s lyrics, is clearly a bold-faced lie. In fact, Giant pandas might have been taken off the endangered species list sooner had Kanye West’s young protegé never released the song.

To understand why, one must first consider what Desiigner is actually mumbling about. One line in the first verse explains it all: “Black X6, Phantom/White X6 look like a panda.” Panda, then, is not a reference to the beloved bear but to the all-white BMW X6, a car with a pale visage and boldly blackened headlights. Let’s now take a moment to remind ourselves why giant pandas were on the endangered list in the first place: Extreme loss of habitat, due to — you guessed it — climate change. Sorry Desiigner, but we’re wise to your environmentally unfriendly tricks!

Praising sweet vehicles is not a new rap trope by any means, but it has never been an especially environmentally friendly one, either. In particular, the BMW X6 will get Desiigner only 14-19 miles on a single gallon of gas; compared to decidedly less sexy cars, like the electric Volkswagen e-Golf (which can reach distances of 116 miles on a single gallon!), the “Panda” is significantly less panda-friendly.

In June, GQ conjectured that the song may have actually boosted sales of the BMW X6. In May of 2016, when “Panda” hit #1 on Billboard’s Top 100 list, BMW sold 712 X6s — a significant leap from the year prior, when it only sold 565. While writer Jake Woolf admitted his analysis was not enough to conclusively prove “Panda” single-handedly boosted X6 sales, it would be hard to argue that the gas-guzzling car is not now getting more attention that it previously received.

Despite his blatant support for BMW’s sexy gas guzzler, Desiigner managed to convince even the World Wildlife Fund that he had done his part in saving the pandas, prompting the organization to send him #PandaHugs via Twitter.

To be fair, the young rapper has acknowledged his support of the now-“vulnerable” species. “I want to do a big donation to the pandas for all the panda lovers out there,” he said in a Billboard interview in June. “They’re an endangered species — that’s real-life shit.” Whether he will follow through with his plans remains to be seen.