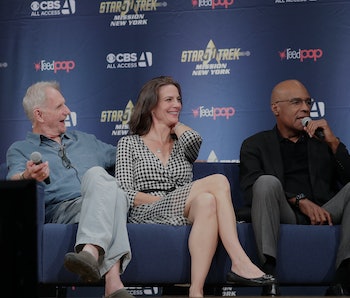 According to Deep Space Nine actors Terry Farrell and Michael Dorn, one of the greatest romances in all of Star Trek wouldn’t have happened if it weren’t for them. Speaking at Star Trek: Mission New York yesterday, Farrell said the idea for Worf and Dax to hook up was “me and Michael’s idea.”

In 1995, when Lt. Commander Worf came over from Star Trek: The Next Generation and became a regular on Star Trek: Deep Space Nine in the fourth season episode “The Way of the Warrior,” no one assumed the surly Klingon badass would end up marrying the beautiful pseudo-immortal Trill, Jadzia Dax. And that’s because the actors themselves — not the writers — were the ones that made it happen.

“Let’s flirt so we get more scenes together,” was Farrell’s plan when her character first met Worf. In the episode, she and Kira are coming of the holosuite wearing a camelot-style princess hats, because they were presumably running a holographic simulation which required them to wear said outrageous hats. Worf’s response in the episode was a stoic and memorable quip: “Nice hat.” Which resulted in Dax’s first attempt to flirt with the Klingon.

“She was flirting. But Worf being Worf didn’t get it,” Michael Dorn said, and then added with mischievously, “Dax was the only one who could really harness Worf.”

Farrell smiled coyly and replied, “Well, there was a lot to harness!” At that, a room full of Star Trek fans erupted in laughter, all probably thinking about Dax and Worf’s tragically unseen —and probably awesome — interspecies sex life.