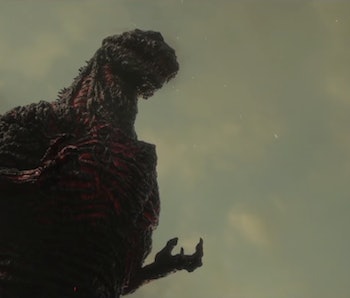 While a sequel to Gareth Edwards’s Godzilla sits in limbo, U.S. fans of the giant lizard can catch the other Godzilla — “Shin Godzilla” — in theaters for a limited run this October.

Toho and Funimation’s Shin Godzilla, alternatively Godzilla Resurgence, is co-directed by Shinji Higuchi and Neon Genesis Evangelion creator Hideaki Anno. Unlike Gareth Edwards’s 2014 reboot, Shin Godzilla is a separate continuity, featuring a version of the King of the Monsters that is just a few meters taller than Hollywood’s nuclear lizard.

Fandango lists Shin Godzilla’s American release beginning October 11 and lasting until October 18. Kaiju movie fan Tumblr Astounding Beyond Belief has compiled an outsourced list of theaters showing Shin Godzilla, but you can check your listings by searching your zip code on Fandango. Reviews from the film have been pretty decent, too. The Hollywood Reporter criticized the film for telling more than showing, but celebrated it for its “intangible quality” the most recent Godzilla “never quite captured, and which is always welcome.” Bloody Disgusting also hailed the film as a “reinvigoration of the franchise.”

Shin Godzilla may be a reboot sans the rubber suit we’ve grown to love but it’s unquestionably Godzilla; a city-stomping super monster and a very good Godzilla to build a new series a films.

In general, fans should be pumped there’s room at the neighborhood multiplex for an array different Godzillas. Edwards made a great action movie with Godzilla, but because the U.S. has never been victim to nuclear bombardment, only Japan and its crop of artists can effectively portray that terror. Godzilla might terrorize the same planet, but when he stomps different sides of the Pacific, he’s in a whole other world.