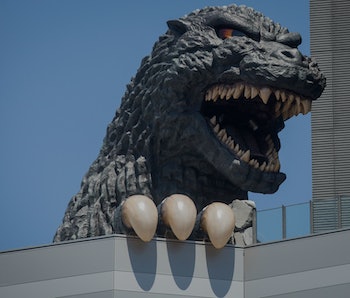 When Godzilla first rose from the ocean depths to wreck havoc on an unsuspecting Tokyo in Ishiro Honda’s Gojira, it was 1954. It was just nine years after World War II, and the country was far from its current status as a formidable leader in technology and engineering. So Godzilla, standing just 50 meters (164 feet) high, towered over everything in Tokyo. But sixty years later, and Godzilla as he first appeared would be puny compared to Tokyo’s skyscrapers of today.

Original Godzilla has now been placed among the buildings of 2016 Tokyo. The monster is shown to scale alongside in the Shinjuku, Tokyo Station, and Shiodome districts. As you can see, Godzilla looks less like the terrifying nuclear monstrosity it was meant to be and more like a lost child exploring a big city. He’s actually kind of cute!

Of course, Godzilla has grown in the last sixty years, meaning the King of the Monsters can still maintain his reign. Legendary’s Godzilla which has a sequel on the way, stands at 108 meters, while Toho’s Shin Godzilla releasing this month from Neon Genesis Evangelion director Hideaki Anno is measured at 118.5 meters. Still, if the Big G didn’t take his vitamins and kept his size from 1954, he’d be pretty puny.

Shin Godzilla is out now in Japan with a U.S. release on the way.