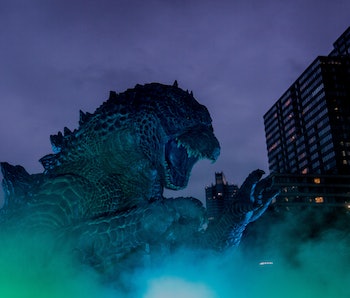 Legendary Pictures and Warner Bros. Godzilla from 2014 was a great success. Not a monster-sized success, but a success that guaranteed its future. Today, Warner Bros. and Legendary have announced what the future entails for the big radiated lizard, and it includes King Kong.

Not only that, but Legendary has teased that other monsters like Rodan, Mothra, and King Ghidorah (whom they own the rights) will fill in an entire Monarch franchise — the monster investigation team founded in 2014’s Godzilla — with Godzilla and King Kong leading the pack. In the press release, Legendary hinted a strong possibility that all these monsters will brawl in one movie.

“I’m excited to reveal that film [2014’s ‘Godzilla’] was only the beginning of an epic new entertainment universe,” said Legendary CEO Thomas Tull. “As a lifelong fan of these characters, I’ve always wanted to see the ultimate showdown, and today we’re pleased to be announcing that and more.”

While Legendary is operating under Universal, these films are a partnership between Legendary and Warner Bros. The two also have another big monster movie franchise, Guillermo del Toro’s Pacific Rim, whose existence is currently in limbo.