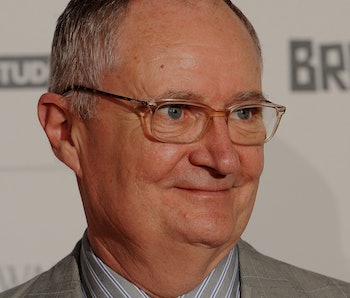 Professor Slughorn will appear in Game of Thrones, and we’re pretty sure he’s playing Howland Reed.

Jim Broadbent, best known as the avuncular Professor Slughorn in the Harry Potter franchise, has been cast in a “significant” role in Game of Thrones Season 7. Game of Thrones keeps its secrets locked tighter than the Iron Bank between seasons, so we don’t know much, but we think there’s high likelihood he will play Howland Reed.

As a brief refresher, Howland Reed is the father of Meera Reed, Bran Stark’s current traveling companion. He also might be the only living person who knows the truth about Jon Snow’s parentage. Recall that, as a young man, he accompanied Ned Stark to the Tower of Joy. Season 6 revealed that he stabbed legendary swordsman Arthur Dayne in the back — which countered how Bran thought the event went down.

In the books, we have yet to meet him as an adult, but we know he is still alive. Naturally this has fueled all sorts of fan theories — the most famous being that Howland Reed is secretly the High Sparrow.

So it’s time for Howland Reed to emerge because he’s crucial to the credibility of Bran’s story.

Even if he isn’t Howland Reed, Broadbent’s casting will continue the parallels between Game of Thrones and Harry Potter. David Bradley, aka Filch in Harry Potter, played the thankfully dead Walder Frey; Michelle Fairley, aka Catelyn Stark herself, was Hermione’s mom for a hot second in Deathly Hallows, the wilding Osha, recently slain by Ramsay, was played by Natalia Tena, aka Tonks; and Freddie Stroma, aka Cormac McLaggen, played Sam’s brother in that awkward dinner scene.

But Broadbent fits the bill age-wise, and that role would indeed be “significant.”

Game of Thrones season 7 will contain seven episodes and air during summer 2017.