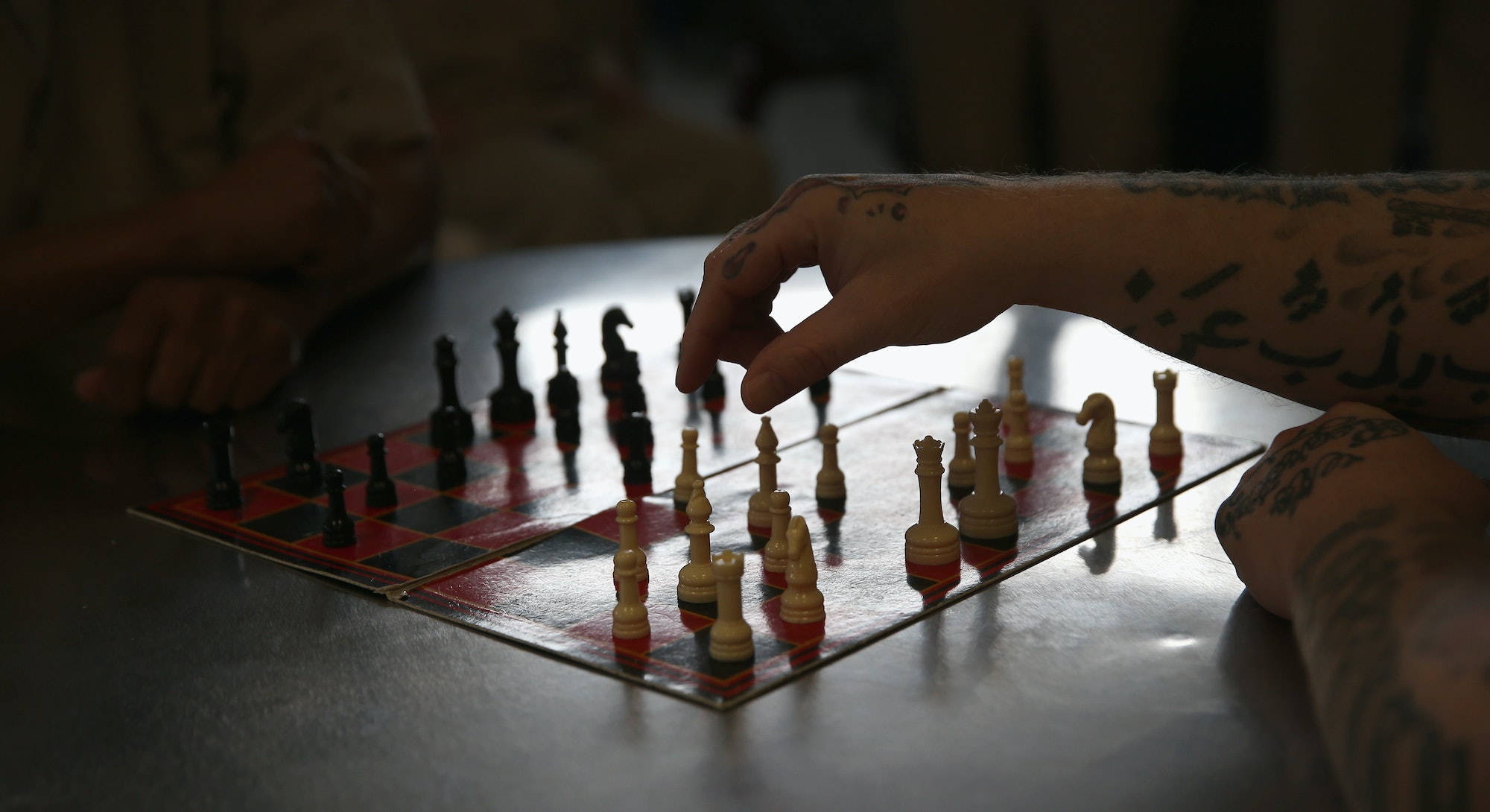 Arian Croft spent the eighties pretending not to play board games. His parents were convinced by the era’s oppressive televangelist-powered rumor mill that Dungeons & Dragons was part of a satanic cult. It sounded less unreasonable back then, though plenty of teenagers rebelled. As a kid fascinated by fantasy, mythology, and science fiction, Croft secretively sought a countercultural place in cardboard worlds.

Today, he’s a professional game designer hard at work on a tabletop RPG. Things have changed.

The image of social outcasts huddled in their parents’ basements over board games has been reinforced through television, which has neutered the perception of the games over the years. And so, it’s easy to forget that roleplaying as orc warriors or elven mages did actually scare people.

The board game industry is booming. Though the business can still feel distinctly German — the major publishing houses Mayfair Games and Z-Man Games put out blockbusters like Catan and Carcassone — it’s a global growth industry. And the growing is being done in a lot of kitchens and living rooms. Estimates from FiveThirtyEight indicate that just crowdfunded board games alone constituted a $196-million business in 2015. There are several reasons for this boom. Mass enthusiasm for fantasy and science fiction has given board game creators endless source material, video games have mainstreamed the idea of adult gaming, and better creative tools have upped the hit rate. There has never been a better time to make a board game — and nostalgia has a lot to do with that.

“I love that there’s been a massive rise in the board game community,” Croft says. “When I was growing up, tabletop gaming was stigmatized, and was looked upon as being socially unacceptable if not downright deviant.”

Bonds formed in strife are more powerful. It is not a coincidence that the centerpiece of the Netflix hit Stranger Things was a Dungeons and Dragons set surrounded by pre-pubescent nerds. The mainstreaming of that furtive culture expanded it, but also sanctified those early years spent around hand-drawn maps, die-cast plastic figurines in hand. Croft isn’t trying to relive that past, but he is trying to extract the best of it. He made a name for himself after releasing a 3D-printed adaptation of the game “Cyvasse,” which is mentioned in A Song of Ice and Fire. His version was based on textual clues and interviews given by George R.R. Martin. It was an indie effort.

“We might take the odd commission to make one if someone is willing to pay for the time it takes to produce it, but our production capabilities are really only suited to making prototypes and copies for friends and family,” Croft says.

But the gaming community isn’t all about low-budget).

In 2013 Craig Stern successfully funded his game, Telepath Tactics on Kickstarter, blowing way past his initial $15,000 campaign goal. The role-playing experience about psychokinetic medieval knights was technically a video game, but that was mostly to facilitate instant deliveries. The game earned critical praise and sold well, helping establish Stern, who has seized the moment and is now creating a board game called True Messiah, which is styled to look like a cross between Lovecraft and Warcraft, taking inspiration from the dark fantasy art of Polish illustrator Zdzisław Beksińsk.

“At first, True Messiah was this janky-looking board game prototype consisting of checkers pieces, a museum board, and paper squares in card sleeves,” he explains. “I had no idea what I would ultimately do with the thing.”

The thing ultimately became his coping project after the arduous development of Telepath Tactics. After years making the video game, and months of follow-up coding, patching the released game, Stern was left burnt out. “[W]hy not take True Messiah, finalize the design, commission some nice art for it, then sell the thing on Kickstarter?” After hours of research to confirm this was a viable strategy, Stern gave himself a year to plan and finalize the project before launching his Kickstarter campaign. He believes it will make money, which is no small thing given his background.

“My family was poor, and we moved around a lot due to our persistent inability to pay rent,” Stern recalls. “Imagining different worlds—and inventing rules for navigating and interacting with them—may be laborious, but it was also a key skill that kept me from withering away from the stress and tedium of my childhood existence.”

Stern, like many of his peers in the board game community is hedging his bets on Kickstarter. He already has a working professional prototype with custom illustrated cards, boards, and game pieces. Unfortunately, to produce at a massive scale, most manufacturers won’t even talk to developers unless they intend to order 1000 units or more. With reasonable volume discounts kicking in at around 1500 units, many developers have a difficult time just shipping their games from China to a distributor.

Going to a publisher helps alleviate the financial burden, but as Stern tells me, publishers will “try to minimize their own risk by acting as risk-averse gatekeepers… And in the process, publishers won’t think twice about radically altering your game’s theme to make it more marketable.” For Stern’s game which features disturbing imagery and sacrilegious themes, he won’t risk pushing his game through a market absolutely obsessed with family-friendliness. That’s why self-financing his project through Kickstarter will ensure that he can work directly with a manufacturer without a publisher, and make True Messiah to his exact specifications.

“Seeing something you made on a shelf or in someone’s home is WAY cooler than getting an email that someone downloaded your app or whatever,” Andrew Smith, who designs board games under his label Gold Seal Games explained. Javier Loustaunau, a game designer from Mexico adds that “to have something I made that I wanted and would never exist is priceless.”

That’s where Tavis Parker and The Game Crafter comes in.

Parker, one of the co-founders of The Game Crafter, is helping amateur hobbyists produce their dream projects. The Game Crafter is an on-demand service that avoids large up-front investments through direct sales. From their website, board game makers can order boards, cards, pieces, decks, and whatever else their board game requires, all from an a la carte menu. The Game Crafter also includes proofing tools so that designers can ensure that their projects are at a professional level. With a community 115,000 members strong and growing, hobbyists use Game Crafter’s services to facilitate major game-making ambitions, or just make a professional prototype to play with their friends. Parker’s company is helping people build their dream games to share with friends and family.

Parker for his part sees his service as a “stepping stone” that allows game makers to sidestep the hassle of working with manufacturers from China or India. And while it was his co-founder, JT, that initially proposed turning their software company into a direct-to-order board game manufacturer, Parker has come to see the board game community as the growing marvel it is. “There’s a desire to meet face-to-face with your friends and a grab a beer that makes board games that much more special on a personal level.”

With over 100,000 projects hosted by The Game Crafter, I used the sites chat function to ask these game builders why they’ve chosen to make board games. “Why do people do creative stuff?” user ActionJack responds immediately. I think most of us have always had the design bug,” CrassPip follows-up. “Because it’s fun. Everyone needs a hobby, a user named zovu adds.

For some making board games is cheaper than making a video game, but offers the same ludological thrills. For others, it’s the ability to physically build a social experience for them and their friends, and hey if they’re lucky, for the whole world if the game proves popular enough. Fame, money, social interaction, the possibility of making something as ubiquitous as a Monopoly or Catan is all the motivation board game makers need to pursue and perfect their craft.

“I don’t think this generation and those forward will feel like pariahs for being into games[,]” Croft says. “Living in the future is pretty cool.”