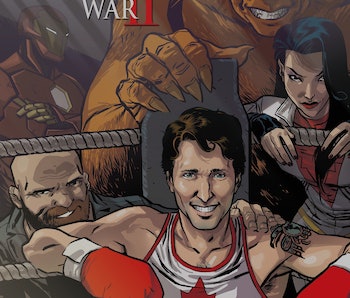 Canadian Prime Minister and “woke bae” Justin Trudeau is not Team Danvers. Debuting in the Marvel Universe in issue #5 of Civil War II: Choosing Sides, an anthology parallel to Civil War II from Brian Michael Bendis, Trudeau rails Canada’s superheroes Alpha Flight for their support of Carol Danvers, aka Captain Marvel, who has recruited an Inhuman psychic to stop crimes before the guilty commit them. With rare logic and reason, Trudeau might have the most common sense among the Marvel heroes.

If you haven’t been reading Civil War II, the new wedge is between Iron Man and Captain Marvel, a space-faring heroine making her movie debut in 2018, played by Brie Larson. Carol has recruited Ulysses, a new Inhuman — people with powers granted by their alien DNA — who can predict crimes and calamities before they happen. The problem is that Ulysses’s visions aren’t biblical, but it’s beyond likely these devastating events don’t even happen. Carol, who maybe saw Minority Report too many times, refuses to gamble the odds and has a fraction of Marvel’s superheroes apprehending the culpable before they’re even technically guilty. Stark, having grown up since his own mistakes in Mark Millar’s Civil War from 2006, is challenging Carol.

And there’s Justin Trudeau, supporting Iron Man and condemning Alpha Flight and Captain Marvel for stepping on civil liberties. Canadian and American politics have their share of differences, but both sides of the border share an idealism toward individual liberties. Facing Alpha Flight in his office, Trudeau says Carol and her side are playing a “dangerous game of psychic telephone.”

“Above all, civil liberties must be protected,” Trudeau says in the issue, penned by Eisner-winner Chip Zdarsky (Sex Criminals), “and there are so many holes in your process that even the ‘84 Leafs could get through them.” Man, dude really is Canadian.

Even putting aside my own take on Civil War II’s themes — despite its firm stance in sci-fi than the first Civil War, it’s still plausible in our technological era where we’ve given our identities to Google, Apple, and Facebook — Trudeau’s words are alarming as they are comforting. He’s the most sensible guy in the room, even compared to the “superheroes” Alpha Flight, who appear to only act out of loyalty to Danvers, and not their personal convictions.

Trudeau also spars with Tony Stark. Maybe his basic knowledge in quantum computing puts him in circles with Iron Man, although maybe not.

There’s expected groaning from fans when superhero fantasies get real with socio-political topics, but that’s pretty typical. From Green Arrow/Green Lantern to that time Spider-Man fist-bumped Wolverine when H.W. finished his term, it shouldn’t be hard to swallow when a likable politician is Iron Man’s boxing partner out of nowhere. But does it actually make sense a billionaire industrialist confides in Canada’s Prime Minister?

Modern cameos like Obama in The Amazing Spider-Man and Secret Invasion and Bill Clinton in The Death of Superman were agnostic of administrative policies. Most of the time they’re inoffensive landmarks to symbolize the time and place the issues came to exist. (There are outliers, like when Erik Larsen’s Savage Dragon endorsed Obama during the 2008 election.) Trudeau in Civil War II is different than Obama hanging with Spidey in that he’s a living, breathing official that weighs in on a fictional issue in a superhero universe. There’s nothing wrong with that, as Trudeau represents a realistic voice in a government in a fantastical world. It helps with the immersion.

But as someone who is in general suspicious of endorsements — don’t forget that Marvel CEO Ike Perlmutter donated to Trump’s “charity” — Trudeau fortuitously says what I think of his presence: “I think these methods are flawed, and I think it’s a dangerous path you’ve embarked on.”