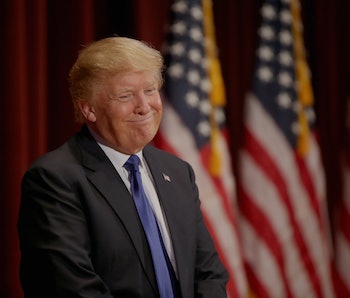 Exiled Fox News hobgoblin Donald Trump went to Iowa’s Drake University during Thursday’s Republican debate and held his own event, a charity fundraiser for the Donald J. Trump Foundation. That organization (dubiously) claims to help veterans, and whether they were moved by the cause or simply cozying up to power, the elite were on hand to sling some cash around. One such culprit: Marvel Entertainment CEO Ike Perlmutter, who donated a hefty $1 million, and aw, man, really?

Though it’s only a charitable offering and not a campaign donation, it’s still an endorsement of sorts to a personified GIF who has personified racism and xenophobia throughout his presidential campaign. Perlmutter, whom Trump mentioned by name during the event, is notoriously withdrawn from public life. It’s difficult to discern his political leanings from this or any other gesture. But on a number of levels, this has to come as a deeply disappointing move to Marvel fans — and to its talent.

The CEO’s private donation is an image whiplash to Marvel’s storied embrace of progressivism and inclusivity, which have been the publisher’s ethos since Stan Lee was writing Amazing Spider-Man comics. Marvel has gone all-in with diversity and progressivism with the All-New, All-Different continuity reboot, featuring racially diverse superheroes such as Kamala Khan, aka Ms. Marvel, a teenaged Muslim-American superhero, whose books frequently top the best-seller lists.

The Muslim-American writer of Ms. Marvel, G. Willow Wilson, tweeted concern over the CEO’s donation, and publicly stated she will voice her concerns to the higher-ups.

She probably won’t be alone. Among Marvel’s top editors is Pakistani-American Muslim Sana Amanat, who, in fact, co-created Ms. Marvel. Amanat was a guest on Late Night a few weeks ago, and blasted Trump (with kindness) to host Seth Meyers.

As a private citizen, Perlmutter is, of course, free to use his personal wealth to benefit whomever he feels deserves it. But it’s a disappointing day when the CEO of a progressive brand built on heroism supports the real-life version of Lex Luthor.