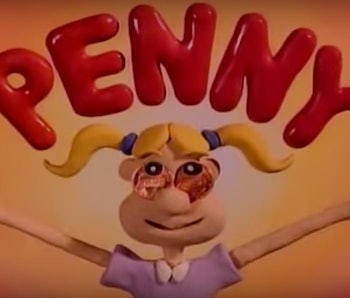 There’s no excuse for not watching Pee Wee’s Playhouse. It’s high-octane absurdity with enormous heart, and it’s one of the only kids shows that appeals to adults because it was originally created for them. The Penny Cartoons segment was one of the main inspirations for the Oscar-winning Wallace and Gromit animated series.

Though the show, which ran from 1986 to 1991 is rightfully remembered for the Pee Wee character, Cowboy Curtis (Laurence Fishburne), and Miss Yvonne, one of the most influential parts of the series began the first time the King of Cartoons entered the playhouse.

Pee Wee’s Playhouse was the jumping off point for a number of animators who would later come to prominence in the 1990s, but the most iconic of the recurring cartoon segments on the show were the Penny cartoons, starring the eponymous little clay girl with pennies for eyes. Voiced by a kid, the Penny cartoons were developed by Craig Bartlett and Nick Park, who would go on to create Hey Arnold! and Wallace and Gromit, respectively.

The premises of these shorts were simple — Penny talks about her toy duckie, Penny talks about the boys in her school that bug her, Penny tells you how to make toast — but her innovation lies in the relatively low-cost claymation technique she was developed under, which would lead to the early style of the Wallace and Gromit shorts.

While Bartlett would later ease off of claymation in the direction of the Nicktoons of the ‘90s, the abstract backgrounds and depth of field developed in the Penny shorts would become an important technique for Nick Park, who had only recently joined the Aardman Animations camp that was completely counter-intuitive to the traditional 3D claymation approach. Aardman was the company to develop the Penny character, which Bartlett would go on to direct a series of shorts prior to heading to the Nickelodeon animation studio as a story editor for Rugrats.

“Pee Wee said, ‘the show needs a girl,’” Bartlett explained on the Nicktoons Animation Podcast this summer. “And they said, how about a girl with pennies for eyes?”

In spite of its physical depth, Bartlett goes on, Penny shorts were made by shooting overhead onto backlit glass, essentially a jumbo overhead projector. “There was a flat background that you would slide in and out,” he explained of the off-kilter slides Penny appeared in front of. “Much like a puppet show, you have a proscenium that’s the frame, a puppet up in the front doing their business. So if you could think of a way to do a puppet show, you could tell any kind of Penny story.”

If you haven’t watched Pee Wee’s Playhouse, or you’re still butt-hurt about Paul Reubens getting busted for jerking it in a theater virtually created with the intent of jerking it in mind in 1991, then kindly show yourself the door. Without the King of Cartoons’ repertoire, here’s what we wouldn’t have: Wallace & Gromit, Hey Arnold!, Shaun the Sheep, Dinosaur Train, Creature Comforts, some iconic episodes of Rugrats and Johnny Bravo, or Chicken Run, and that’s just the tip of the iceberg.

Thanks, Penny, hope the boys aren’t as annoying these days.

More like this
Entertainment
5.17.2022 10:30 AM
Do we really need Black Mirror Season 6? Why the Netflix series has lost its edge
By Dais Johnston
Entertainment
3 hours ago
Love, Death + Robots Vol. 3 release date, time, plot, cast, and trailer for Netflix’s sci-fi series
By Jeff Spry
Culture
5.7.2022 8:00 PM
Studio Ghibli films have a subversive message hiding in plain sight
By Yuan Pan and The Conversation
Related Tags
Share: