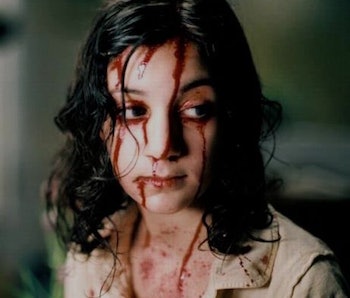 TNT is resurrecting the Swedish vampire classic Let the Right One In, bringing sensitive bloodsuckers back into our homes and screens.

Originally a bestselling novel by Swedish author John Ajvide Lindqvist, the story has been revamped for two different movies to date: The 2008 Swedish film Let the Right One In, starring Lina Leandersson, and the 2010 American film Let Me In, starring Chloë Grace Moretz. Now its latest incarnation — assuming the show is picked up for a series order— could be a new serial television show.

The story revolves around the friendship between a bullied preteen and a young vampire, with moody gothic trappings – and a dark, lonely atmosphere that is a far cry from the lighter True Blood or Being Human fare. Though both film adaptations have cast female actresses to play as the vampire Eli, the character’s ambiguous gender could be an opportunity for the show to try something new.

According to Deadline, Teen Wolf creator Jeff Davis is writing the script and executive producing alongside Becky Clements (Aquarius) and Simon Oakes (Let Me In).

The prospect of a Let the Right One In series signifies a resurgence of the vampire genre, which has remained in the coffin in recent years as pop culture has undergone a case of vampire fatigue, after an over-saturation of the early aughts. Anne Rice’s classic Interview with the Vampire is also getting an update, so this could signify the return of a darker, more classic vampire era, post Twilight and True Blood.

It also indicates that TNT is continuing to revamp its drama programing in general, pivoting away from police procedurals like Castle and Bones and stepping toward moodier work like Animal Kingdom and the upcoming punk rock Shakespeare show.

There is no word about casting yet.

More like this
Entertainment
5.13.2022 10:30 AM
Moon Knight almost assembled Marvel's next huge team-up, writer reveals
By Mónica Marie Zorrilla
Entertainment
5.10.2022 11:15 AM
5 years ago, Happy Death Day did one revolutionary thing no time-travel movie had done before
By Will Ashton
Entertainment
5.9.2022 4:00 PM
Alex Garland’s surreal thriller 'Men' is maddening in the best way possible
By Jenni Miller
Related Tags
Share: