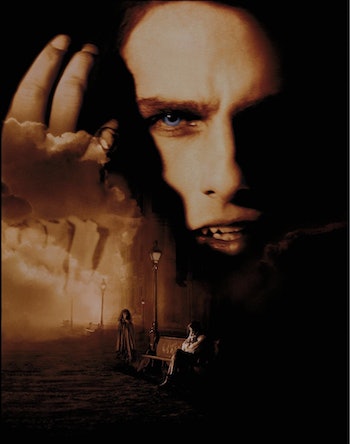 Anne Rice’s Interview With The Vampire is about to get yet another film reboot. The Fault in Our Stars director Josh Boone has penned the script, in case it doesn’t already reek of grasping at a zeitgeist that’s already gone. There’s nothing wrong with the story itself — it’s a classic — but the idea of revisiting it is the opposite of fresh blood. And with modern horror booming with innovative storytelling like The Witch and 10 Cloverfield Lane, to have a vampire movie feel tepid and late to the party would defeat the entire purpose of a vampire story. It’s hardly what Lestat would want.

Interview with the Vampire already had its moment in the zeitgeist. The film is as iconic as the novel, but it has a sensibility that is firmly rooted in the 90s. The crux of the story is the fraught relationship between Louis and Lestat, filled with sexual tension that straddles the line between subtext and outright text. In the 90s, watching Tom Cruise and Brad Pitt bite each other’s necks while floating around to sexy music was risque, the way vampires should be.

Hedonism and sex are a key part of vampire narratives, whether it’s implied (Fright Night; Only Lovers Left Alive), depicted outright (True Blood; Laurell K. Hamilton’s Anita Blake books), or existing as a barely-there undercurrent (Dracula; Carmilla). This is because the gothic is a storytelling realm that explores transgression. Vampire stories mix death, sex, fear, and alienation in a concoction that can be as heady today as it was in the Victorian era.

But the key to that sensation is a keen awareness of the times. As cultural mores change, so do taboos. Dracula struck a chord in the 1800s because it was ahead of its time, employing technology and a distinctly modern disjointed writing style — not to mention the scandalous fallen-woman fate of the formerly-pure Lucy Westenra. Watching a woman demand to kiss a man would hardly feel taboo today, but it certainly does in the context of the 1800s.

Fast forward to the 1970s, Interview with The Vampire’s homoerotic undertones felt transgressive in a culture where open discussions of alternate sexualities were not mainstream, and a vampire story felt new and fresh during a time period when they crawled back into the coffin for several years. When it was then made into a film in the 1990’s, the sexual component wasn’t quite as taboo, but it was still a great deal more than it is today.

But in our current moment, it no longer speaks to the time. Unresolved sexual tension between male characters used to be risque, but now it’s pat. Oscar-bait movies regularly feature it, and modern gothic shows get to the point much faster.

There’s also the component that, after an influx of too many vampire stories to count (True Blood, Being Human, Twilight, The Vampire Diaries, The Historian, The Passage, etc), we’re also in a moment of vampire fatigue. Interview with the Vampire revitalized the genre in the 70s and 90s when it sat untouched for a time, but it’s hardly gathered dust and cobwebs of late. If anything, it’s feeling stale, and revisiting old territory is not the way to snap out of it.

If Hollywood really wants a vampire tale, there’s no lack of more innovative stories to chose from that would feel more current. Justin Cronin’s The Passage takes a biological and dystopian angle, Susan Hubbard’s The Society of S takes an environmental slant, Matt Haig’s The Radleys takes a dysfunctional family approach. Hell, even the oldest tale of all, Bram Stoker’s Dracula, has never gotten its just due with a faithful adaptation. If Hollywood wants an old and oft-visited vampire story, there’s nothing more ripe than that.

The vampire narrative is full of rich storytelling potential. It’s always been a forward thinking genre that pokes at cultural mores and brings us to the edges of our comfort zones. But everything that Interview with The Vampire prods is outdated, and any adaptation is destined to feel toothless — which is the opposite of what vampire stories should stand for.