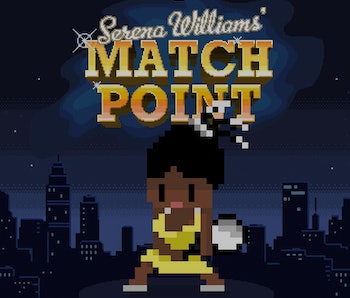 Swiping through Snapchat’s discover function just got a whole lot more competitive — now, if you get far enough into the ESPN channel, you can step into tennis legend Serena Williams’s shoes.

Snapchat has been aggressively expanding out into more diverse mediums, first with the introduction of branded videos. Now the social-media service has partnered with ESPN and Gatorade to present its first in-app video game, Serena Match Point.

Snapchat users can access the game by swiping through the ESPN channel on Snapchat’s Discover page. After a few swipes, players will see the game’s title screen, and swiping down from there will allows users to play the game.

Match Point is a pretty simple tapping game – in which players must time their taps perfectly to return serves from Serena Williams’s opponents. Timing your taps perfectly will cause the returns to be that much more powerful. There are 22 levels in total, each corresponding to an actual Grand Slam singles title Williams has won in the past. The 23rd level will release with this year’s U.S. Open and the possibility of Williams’ record-setting 23rd Grand Slam title win.

The 8-bit game is surprisingly addictive for something branded with pixelated Gatorade logos. The spritework is fluid, and the little victory animation Serena Williams does after each level is a joy to watch. Also, reliving each of Williams’s Grand Slam victories in pixel format reminds players just how big an accomplishment 22 Grand Slam victories is.

The game is accessible either through Snapchat or a browser version for those who don’t have the app.

More like this
Gaming
15 hours ago
4 best weapons to upgrade first in the Dead Space remake
By Joseph Yaden
Gaming
12 hours ago
God of War Ragnarok ending theory explains Atreus' most important decision
By Willa Rowe
Gaming
9 hours ago
Dirge of Cerberus is still the most incoherent Final Fantasy game ever
By Willa Rowe
LEARN SOMETHING NEW EVERY DAY.
Related Tags
Share: