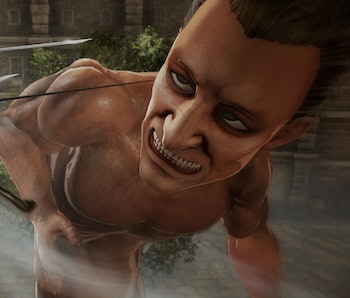 Few games this year match the thrill of Koei Tecmo’s Attack on Titan, an adaptation of Hajima Isayama’s horror manga/anime where humans make their last stand against giant, people-eating monsters. The game impressively brings the mythology’s unique method of Titan extermination to game consoles, but it also may have innovated a new kind of ensemble action game. After two decades of mostly good and few great Marvel and DC superhero games, Attack on Titan provides the template for tomorrow’s best superhero games.

Prompting a fluid narrative in the gameplay of Attack on Titan is its spontaneous party system. Across the semi-open world map, fellow soldiers — graded A to D — are available to join your party of up to five, including your avatar. Once joined, these allies accompany and help you take down Titans you come across. With the flick of the D-pad, you can give them general strategy: Fan Out, a basic “fight to survive” mode of attack, “Guard,” where allies regroup to protect vulnerable things like civilians and important buildings, and “Focus,” where allies focus all their energy towards one specific enemy you choose.

Call me crazy, but that system just sounds like it’s waiting for a kick-ass DC or Marvel superhero game to adopt and build upon it. The party system works mostly in theory in Attack on Titan — it’s not very comprehensive and, amidst the chaos, you won’t notice much of a difference between “Fan Out” versus “Focus.” But the groundwork is there for a huge, sprawling DC or Marvel game.

Imagine for a second that the final fight from Joss Whedon’s The Avengers was turned into a video game using Attack on Titan’s layout. Picture controlling Captain America, and at any time you can recruit Thor, Hulk, Black Widow, Iron Man, or Hawkeye into a temporary two- or three-person party to accomplish impromptu skirmishes around New York. Imagine using field commands like “Fan Out” to clear out an area clogged with Chitauri or “Guard” to protect a few helpless civilians. And imagine, at any moment, you can swap out members of your party for someone else; maybe, in a given scenario, Black Widow is better suited than Thor. But the choice is ultimately yours.

In the few hours I played Attack on Titan, I couldn’t shake this notion. The closest superhero games that resembles anything close to this were the dungeon RPGs Marvel: Ultimate Alliance from nearly a decade ago, but even those didn’t have the spontaneity or immediacy of Attack on Titan. Very few superhero games even try this kind of play style — most have been fighting games like Injustice or Marvel: Contest of Champions, or platform adventures like almost every movie tie-in during the 2000s. I’m sure the logistics and technical balancing is a nightmare, but at least now Attack on Titan provides the skeleton for tomorrow’s best DC and Marvel game. It’s up to them if it should have any meat.

More like this
Gaming
Jan. 18, 2023
NieR anime Episode 2 takes bigger risks than The Last of Us premiere
By Willa Rowe
Gaming
4 hours ago
How to Duel Your Friends in the Marvel Snap Battle Mode
By Joseph Yaden
Gaming
Jan. 18, 2023
A Space for the Unbound is 2023's first great indie game
By George Yang
LEARN SOMETHING NEW EVERY DAY.
Related Tags
Share: