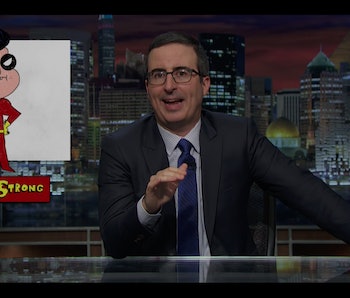 There’s only so many times you can remake Spider-man’s origin story. In a web exclusive episode of Last Week Tonight on Monday, John Oliver outlined his solution for a rather dreary summer of rehashed superhero films. Some of the hits this year include Deadpool (or “Mean Spider-man,” as Oliver described it), Batman v Superman (“Sadman vs Super Sadman”) and Suicide Squad (“Insane Clown Posse takes Manhattan”).

Casting those aside, Oliver has a bold proposal. His name’s Johnny Strong, and he’s pretty badass. Oliver’s creation from the fifth grade, he described Strong as someone who’s “seen a boob and knows what the f word is.” He’s not to be mssed with.

By day, Strong is mild-mannered schoolchild John Olivier (reportedly no relation to Oliver), but in between coming back from school and bedtime, Olivier transforms into strong. His arch-nemeses include Doc Bedtime, capable of plunging the world into darkness, and Mrs Thomas the clarinet teacher.

The first issue, which covers a mystery intruder that bears resemblance to Oliver’s cat, is called Night Moves. “A title I did not realize was also the name of a Bob Seger song,” Oliver said. Issue two, Land of the Lost Cat Posters, solves the mystery surrounding the creature in the first issue.

Johnny Strong may have crudely animated scenes, a rather mundane plot and little in the way of secondary characters, but perhaps it’s finally the relatable everyman that audiences have been crying out for. Batman v Superman and Suicide Squad both disappointed critics, and maybe it’s a sign that Hollywood needs to expand its net and take on films about heroes that don’t want to learn the clarinet and have trouble sleeping at night.

Last Week Tonight returns to its regular scheduling on HBO September 25. “Until then, Hollywood, I am awaiting your call…strongly,” Oliver said.

More like this
Entertainment
11 hours ago
Will Agatha: Coven of Chaos feature one of Marvel’s oldest (and scariest) villains?
By Richard Newby
Entertainment
9 hours ago
How Werewolf By Night morphed into Marvel’s most exciting project yet
By Eric Francisco
Entertainment
8 hours ago
Who is Hulk King? She-Hulk could be setting up a Secret Invasion villain
By Dais Johnston
Share: