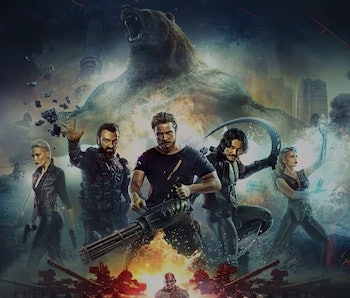 A new trailer for the Russian superhero movie Zaschitniki (or Guardians) dropped this week, showing off more of the superhero team members’ powers. The film, which American audiences have already dubbed as following the “Russian Avengers”, will premiere February 23, 2017.

The mutants of Zaschitniki were created during the Cold War to protect Mother Russia, and though the film’s villains aren’t entirely clear yet, Inverse has decided to see how this new group stacks up against existing international superhero teams. We polled our writing staff to determine which superheroes would be most likely to defeat Russia’s Guardians, if they ever posed a threat to the global economy.

ERIC: The Mighty Morphin Power Rangers. Armed with eight 100-foot robots (including the Thunderzords and the Ninja Megazords) and weapons they only use for defense, theyre a well-oiled Wu-Tang Clan in spandex. They’ve also got the numbers game: Six to Guardians’s four.

EMILY: Squirrel Girl, Tippy Toe, and the band of other obedient squirrels. They took down goddamn Galactus AND Thanos just by talking to them. They’re America’s very adorable, chittering diplomatic squad, and in order to protect Squirrel Girl, they climb around her in a Squirrel suit that would definitely intimidate Russia’s werebear.

ROLLIN: I pick the Guardians from that Jack Frost movie, called, hold up — RISE OF THE GUARDIANS, yeah, okay, there it is. Can we just put this image here, please? I feel it tells my story far better than words might.

MATT: Since any conflict between the US and Russia ends up becoming ideologically charged, we need a team that is best representative of core American values. If there’s gonna be an “American” team to fight against the forces of Russia, it’s gonna be the Watchmen and all the glorious homegrown nihilism associated with them.

EMILY: Okay, we’ve got a real rag-tag group of weirdos here. Everyone have their picks? Let’s start with Rollin. Why do you think that team in particular could defeat Russia? They look pretty friendly to me.

ROLLIN: Emily, you of all people should know that Jack Frost is not to be trifled with. Plus, my team includes Russian Santa. So, you know, some measure of home turf advantage there. I’m not saying everyone needs the Tooth Fairy on their side, but it sure doesnt hurt.

EMILY: Yeah, Russian Santa (that’s not his actual name, right?) would make a great double agent against the Guardians. Matt, wouldn’t the Watchmen have trouble getting together? These Russian guys seem pretty tight, but Dr. Manhattan and Rorschach hate each other, don’t they?

MATT: Sure, but I feel like I’m the only one seeing this for geo-political crisis it is. Much as how the Watchmen banded together under the banner of Uncle Sam to literally destroy Vietnam (commies), I can see this to be another one of those “greater good” moments of U.S. vs. the former Soviet Union. The Watchmen will have no other options than to put aside differences to take down their ideological other.

ERIC: Here’s the uncomfortable truth: To put down the Guardians, you’re going to have to kill them. Because, like, look at them: A giant bear, a dude with scythes, a dude with machine guns… Most superheroes don’t kill.

I doubt Rollin’s team will shed blood, and I’m certain the Watchmen will fail, whether they’re torn apart internally or Nixon stops to prevent another scandal in his administration. The Power Rangers have no problem killing their enemies. They slaughter Rita and Lord Zedd’s monsters on the daily, using medieval weapons and giant machines with heat-seeking missiles. I’m not choosing the Power Rangers out of bias. I’m choosing them because they can get the job done.

EMILY: I’m going to stop you there. What kind of person looks at a BEAR MAN and says “yup, we’ve gotta kill him, it’s the only way”? The whole deal with Squirrel Girl and Tippy Toe is that they don’t ever really fight anyone. They certainly don’t kill them! I would argue, and I think Doreen Green would too, that killing or maiming the Guardians is only going to cause the kind of international bloodshed Matt and the Watchmen are warning us about!

What’s the deal with Guardians, anyway, do they have access to nukes? Does Putin know about them?

ROLLIN: I would also like to register my severe disagreement with my Guardians not shedding blood. Shit’s dark. You even seen the movie?

ERIC: There was a movie?

ROLLIN: Jesus, just… Go watch Rise of the Guardians before any of you try to step to Jack Frost. It’s a good movie full of good scenes.

Also, why has nobody recommended Coon and friends? I would also like to throw in Coon and Friends into the mix as well.

ADRIAN: I understand your fear.

EMILY: No one’s allowed multiple teams! That’s not how superhero debates work! I can’t just add Sailor Moon in with Squirrel Girl and call it a day.

MATT: Yeah Eric. What if I decide I want Jesus on the Watchmen?

ERIC: I would read the hell out of it, that’s what.

EMILY: I think we’ve illustrated as a group that Americans are too chaotic and divided into camps to stand any chance combating a Russian supergroup. There’s no way the Russian Guardians experience infighting! Look at them, all they do is fight united in the trailer! To be completely honest, I’m disappointed in all of you. I mean, what would Captain America say?