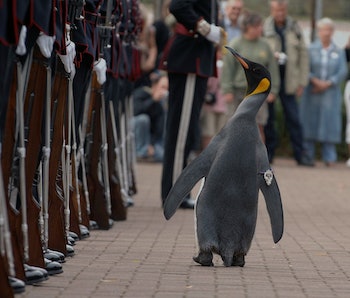 Sir Nils Olav received a prestigious honor from His Majesty the King of Norway’s Guard on Monday, when he was promoted from a knight to a brigadier.

Sir Nils, by the way, is a king penguin.

A stout fellow and resident of the RZSS Edinburgh Zoo, Sir Nils received the honor with a salute from the Norwegian infantry, who, when not reporting to their penguin boss, are in charge with defending their country’s capital, Oslo. Yes, a real part of their jobs is submitting themselves to “inspection” by a penguin whenever they roll into Scotland.

Described by the zoo as the “most famous king penguin in the world,” Sir Nils is actually the third Sir Nils that has been under Norway’s charge. Norway adopted the first Sir Nils in 1972 after Major Nils Egelien, then-King of Norway, visited the zoo and was charmed by the waddling fellow. (The penguins have been named in his honor and not, unfortunately, in honor of Taylor Swift’s Norwegian alter-ego, Nils Sjoberg.)

The trio of Sir Nils steadily moved up the ranks, starting as Mascot then moving up six spots to the position of Brigadier Sir. From the looks of today’s ceremony, it appears that Sir Nils III is a demanding officer, unafraid to inspect his troops with the demanding appraisal fitting to his title.

There was also a medal ceremony.

The existence of Sir Nils is the result of a long and important history of penguin conservation at the Edinburgh Zoo. It received its first king penguins in 1913 after three were essentially kidnapped by a whaling expedition then presented to the zoo as gifts. The zoo had its first successful hatching of a king penguin chick in 1919 and has pioneered the care and science of penguins ever since.

King penguin populations are considered to be relatively robust compared to those of other penguin species, but zoos, which implement breeding programs, play an integral part in their continued existence. While king penguins in the 19th and 20th centuries were killed for their oil and feathers, today the greatest threat to them is climate change.

A 2008 study from the French National Center for Scientific Research found that warming seas specifically affect the breeding success of king penguins. Higher temperatures hinder the development of the krill that adult king penguins eat, which, in turn, means they cannot bring as much food back to their chicks. This study, which observed populations two years after water temperature was measured, found that a temperature increase of less than one degree can cause a 9 percent drop in king penguin survival. This means that as ocean waters continue to heat up, populations of king penguins will be in real danger.

Climate change is scary stuff, but at least one penguin remains unflappable.