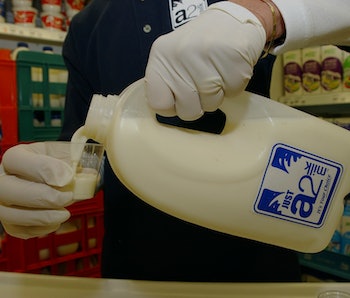 Milk was once one of the simplest and most straightforward substances one could have. But in recent years, of course, the health industry got hold of it, and now in addition to half-and-half and whole and 2-percent and skim, we have dairy-free “milks,” too, like almond milk, coconut milk, cashew milk, and — in a bid to be edgy and foodie and nutritious all at once — cockroach milk.

But as enamored as Americans are with super milks, there’s one we’ve failed to pick up on that’s more popular abroad: A2 milk.

A2 milk is traditional in that it’s still cow’s milk. The difference is that instead of the beta-casein A1 protein found in the most commonly marketed kind of milk, it contains the protein A2. A1 beta-casein releases a specific opioid peptide, beta casomorphin-7, or BCM7, when digested. A2 does not.

Goat milk and sheep milk are naturally A2. So is human milk. Actually, so is cow milk when the cows are from Asia or Africa; a European strain of cow produces A1 beta-casein, the result of a long-ago genetic mutation. But the A1 strain is constrained to a select population, so it’s still possible to breed herds of European cows that produce only A2 milk. This is how the farmers who supply The A2 Milk Company, the New Zealand-based group behind the eponymous product, do what they do.

The different comes down to just one amino acid, but legions of A2 converts say that standard A1 milk aggravates their Irritable Bowel Syndrome or is undrinkable due to their lactose intolerance. A2 milk, the narrative goes, is free of all kinds of risks you face if you drink A1, from everyday gut discomfort to diabetes. There’s also been much talk of dishonest labeling from Lion Group, which produces several brands bearing the A2 badge.

So how super is A2, anyway?

“I am cautious of terms such as ‘super milk,’” Keith Woodford, author of Devil in the Milk: Illness, Health and the Politics of A1 and A2 Milk, said in an email to Inverse. “It is notable that populations that have high intake of A1 beta-casein are also populations that have high rates of heart disease and Type 1 diabetes We now have a better understanding of the science behind this, and we have results from animals, but it is harder to prove definitively in humans through clinical trials because these diseases take so long to manifest themselves.”

In animal tests, A1 beta-casein has been shown to slow the process of food moving through the gut by approximately six hours. This means six more hours between when you drink the milk and when you pee it out during which you’re subject to indigestion, gas, bloating, and the like. According to Woodford, A1 (technically, BCM7) might also contribute to inflammation and various adverse auto-immune reactions. Woodford says that personally, the risk of heart disease is what drives him to avoid milk containing A1 beta-casein, though he will on occasion use it in small amounts for his coffee if there’s no A2 on hand.

The complications from dishonest advertising doesn’t help matters as proponents of A2 try to muscle in on the mainstream dairy industry. To be clear, though, it’s not the effects of A2 that are being misrepresented, only its physical presence in various products. Woodford’s been contacted by many angry, cheated consumers, including his own daughter, who purchased PURA or Dairy Farmers milk after being led to believe it contained exclusively the A2 protein (instead, they contain both A1 and A2).

And that, according to Woodford, means it’s just regular old milk.

More like this
Mind and Body
Oct. 1, 2022
How important is breakfast, really? A health expert explains how to do it right
By Elana Spivack
Mind and Body
Oct. 3, 2022
Why your pee smells after eating asparagus — and why not everyone can smell it
By Katie MacBride
Science
Sep. 23, 2022
Three everyday beverages that may taste worse because of climate change
By Tara Yarlagadda
Related Tags
Share: