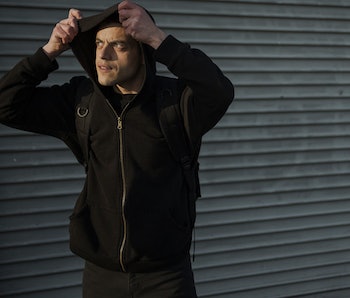 Last night’s episode of Mr. Robot clued us into this season’s big twist, forcing viewers to question what’s real and what’s not all over again. But could we have predicted these events from the episode’s title, “eps2.5_h4ndshake.sme”? Maybe. Spoilers ahead.

In this episode, we find out that Elliot hasn’t been at his mom’s house. He’s been in jail. And he’s been hiding it from us, corrupting his own memories for our benefit. We find out that Elliot is the very definition of an unreliable narrator, and we go back through his memory to review the things we’ve already seen, this time recovering the right information and earning the truth behind the corrupted memories. These themes are captured poetically in the episode title — specifically, the file extension at the end: .sme.

In most instances, .sme is a Samsung-specific file extension that works with Samsung-specific freeware. In this episode, what may seem like a brilliant bit of subtle product placement is also a really poetic metaphor because it’s often used to save archives of text messages and memos for recovery on a computer.

The .sme extension isn’t only used by Samsung, though. It might also refer to a file from SmartEncryptor, which uses the extension to denote an encrypted file. This is also a sly reference to the episode’s events, which were akin to Elliot entering the password and decrypting the encrypted “memories” we’ve been given all season.

No matter the reference, last night’s episode title was a brilliant metaphor for this season’s twist and for the way in which we should approach Elliot’s encrypted or corrupted memories. In Mr. Robot, there’s a reason for everything, and no matter how you look at the .sme reference, it has us thinking that we probably should’ve seen it coming.