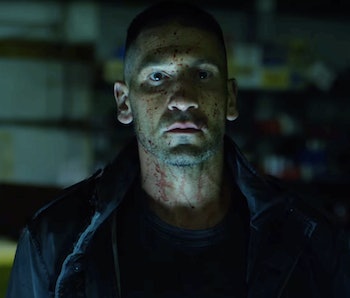 Will we get to witness the solo Netflix exploits of Frank Castle earlier than we expected? It seems the Daredevil spinoff, about the grim, dark New York adventures of the Marvel vigilante known as The Punisher, might hit Netflix a year early – after eagle-eyed fans uncovered a placeholder page for the new series.

This incarnation of the Punisher, played by former Walking Dead actor Jon Bernthal, was first seen in the second season of Daredevil before Netflix announced in April that the character would get his own spinoff show. Initial reports said the new show wouldn’t be released until 2018 based on Netflix’s strategy of releasing individual seasons of two Marvel shows per year.

The first seasons of Daredevil and other Marvel favorite Jessica Jones dropped in 2015 with Daredevil Season 2 and the debut of Luke Cage will follow in 2016. On the docket for 2017 are brand new Marvel shows Iron Fist and The Defenders – but it seems The Punisher might break Netflix’s dual season trend next year.

A report on ComicBook.com found a placeholder that stated that the show will arrive in 2017, though here is the current placeholder on the desktop Netflix site:

The placeholder page for The Punisher is nothing new for Netflix. It usually produces these blank pages for upcoming shows, and sometimes it jumps the gun. For example, the episode titles for the first season of Jessica Jones leaked ahead of the show’s release.

The significance for The Punisher placeholder is that it’s outside of Netflix’s normal pattern to post them for shows more than a year in advance. That would mean a first season for The Punisher is imminent.

Inverse reached out to Netflix for comment but haven’t yet heard back. We will update accordingly.

More like this
Entertainment
6.30.2022 3:25 PM
Netflix may have deliberately spoiled a huge Stranger Things death
By Dais Johnston
Entertainment
6.21.2022 5:00 PM
Umbrella Academy Season 3 release date, time, plot, cast, and trailer for the Netflix series
By Jeff Spry
Entertainment
7.1.2022 9:00 AM
Will there be a Stranger Things Season 5? Everything we know about Netflix show's future
By Mónica Marie Zorrilla
Related Tags
Share: