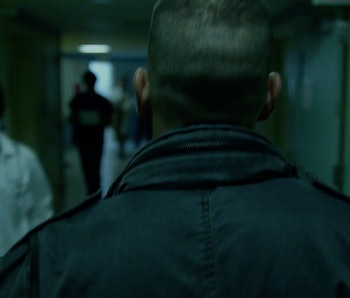 As you’ve binged out the newest season of Netflix’s superhero hit Daredevil, you might have noticed that the show’s cinematographer is simply fascinated with the back of the Punisher’s head. Several of the Punisher’s most important scenes begin with a close tracking shot of the back of Punisher actor Jon Bernthal’s head. The showrunners were so fixated on this perspective of their newest character that, except for a few oblique glimpses, that was how he was introduced in the season 2 trailer:

What is this shot intended to accomplish, though, in the grand scheme of Daredevil season 2 and why does the show’s technical talent come back to it time and time again?

It’s A Close-Up, Kind Of

Throughout film history, the close-up is the go-to shot for establishing an emotional connection between a character and the audience. By giving us a close look at a character’s face, we’re supposed to be able to get inside their head and gain some insight into their emotional state. And then Daredevil gives us this:

The takeaway from this shot is two-fold. First, the Punisher is set up as a mystery that never fully comes unravelled. Since we’re unable to see his face, the audience is made aware right off the bat that they’re not allowed into Frank Castle’s head. He’s immediately cast as a man apart, who may not be devoid of emotion, but who’s clearly not reliant on it.

Second, we’re looking at a slight tweak on an over-the-shoulder shot, another attempt to get people to identify with the subject. Because the audience can see their perspective and what’s awaiting them, we’re unconsciously put in the subject’s shoes, which makes us inevitably identify with them (not a bad thing when the subject of your shot is a cold-blooded murderer).

However, this isn’t a classic OTS shot, because Bernthal’s head almost dominates the frame, which makes him — not his surroundings — the focal point. Cinematographers make use of this technique when they want to create the image of someone looming large, of being almost aggressively in the audience’s face.

In other words, the framing of this shot is intended to make the Punisher a big, oppressive mystery, but one we can root for, as well. After all, from the audience’s perspective, we’re literally standing behind Frank Castle.

Of course, whenever a scene opens with the back of the Punisher’s head, the audience almost invariably gets a few frames where we’re following the Punisher.

This is called a tracking shot (the definition of which is probably self-explanatory. While this shot serves several purposes in the hands of a skilled cinematographer, one of it’s primary uses is the creation of tension in a film. By following a character from behind, the audience isn’t given a clear idea of what lies ahead. That sense of tension is heightened if the character in question is in the middle of the frame. Take, for example, this ultra-famous tracking shot from The Shining:

Again, the placement of the subject in the shot is extremely important. Creepy little Danny here is dead center in the middle of the frame. Our eyes are drawn to him automatically, even as he careens around corners on his little trike. With every turn, our eyes are forced to flick back and forth between the subject and the brief glimpses of the path ahead. It’s fucking nerve wracking.

So, too, are the brief moments that we’re plunked behind the Punisher as he walks towards some unknown destination.

Through the repeated use of the same technique, the audience comes to associate Castle’s appearance with tension, with mystery, and with anxiety. His mere presence on the screen becomes cause for alarm, because the audience is never a hundred percent sure what the Punisher is thinking or what he’s about to do.