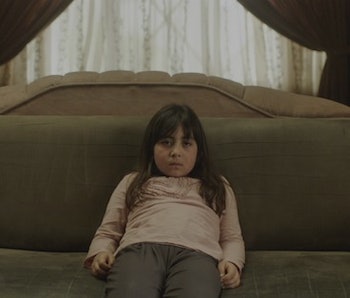 Autumn isn’t too far off, and that means scary movie season is coming. Case in point: Netflix’s new horror movie Under the Shadow, which just released a disturbing new trailer before its release in October, will arrive in time for Halloween.

The film is set in Tehran, during the height of the devastating Iran-Iraq war in the 1980s. It premiered at this years Sundance Film Festival, and earned debut filmmaker Babak Anvari rave reviews. Netflix snapped up the film before it showed at other genre-friendly festivals like SXSW and Fantasia Fest, and the streaming service plans to release it in a limited theatrical release on October 7 – before it debuts online around the world.

Under the Shadow is about a mother (Narges Rashidi) and daughter (Avin Manshadi) who must endure the airstrikes and terror of the Iran-Iraq war on their own after the husband (Bobby Naderi) is conscripted into the Iranian military. But when a missile crashes into their apartment, the conflict becomes personal, supernatural, and utterly terrifying. Besides the political upheaval, air raids, and religious craziness going on, the pair soon realize that their house might be haunted by a djinn, a demon spirit from Arabian folklore.

So it’s about socio-economic strife, demons, and how raising a kid is probably worse than either of those two things. Think of it like a The Babadook 2: Tehran Edition.

Watch the spooky and atmospheric first trailer below:

The supernatural freakout is a slight departure for the streaming giant. The closest original film they’ve produced was the recent blink-and-you’ll-miss it psychological thriller Rebirth or the back-to-basics slasher movie Hush. Under the Shadow has the unique status of being a foreign language horror film with real-life overtones. And it has the potential to be an out-of-nowhere hit after playing to the right festival crowds. We’re comfortable saying right now that it’s not one you want to overlook.

In case you needed some more context, here’s the impressively thorough official synopsis:

“Shideh (Narges Rashidi) and her family live amid the chaos of the Iran-Iraq war, a period known as The War of the Cities. Accused of subversion by the post-Revolution government and blacklisted from medical college, she falls into a state of malaise. With Tehran under the constant threat of aerial bombardment, her husband (Bobby Naderi) is drafted and sent to the frontlines by the army, leaving Shideh all alone to protect their young daughter, Dorsa (Avin Manshadi). Soon after he leaves, a missile hits their apartment building and while failing to explode, a neighbor dies under mysterious circumstances and Dorsa’s behavior becomes increasingly erratic.

Shideh finds herself slowly drawn into the ensuing turmoil, struggling to cling onto what is real and what is not. Searching for answers, she learns from a superstitious neighbor that the cursed missile might have brought with it Djinn malevolent Middle-Eastern spirits that travel on the wind. Convinced that a supernatural force within the building is attempting to possess Dorsa, Shideh has no choice but to confront these forces if she is to save her daughter and herself.”

Under the Shadow travels on the wind into theaters and on VOD October 7 before hitting Netflix.

More like this
Entertainment
6.30.2022 1:58 PM
Stranger Things Season 4 Volume 2 release date and time, trailer, runtime, episode length, spoilers, theories, and more
By Jeff Spry
Culture
6.30.2022 11:30 AM
You need to watch David Fincher's most important techno-thriller before it leaves Netflix this week
By Eric Francisco
Culture
6.28.2022 11:00 AM
5 years ago, the director of Parasite made his most unsettling sci-fi movie
By Allyson Johnson
Related Tags
Share: