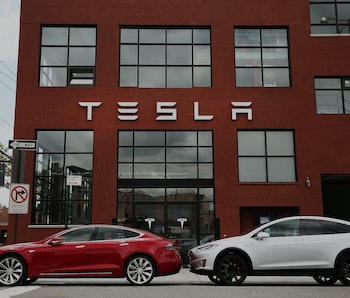 Tesla cars might get a bigger, better, stronger battery. One of the biggest drawbacks to electric cars is, well, they’re electric, and their batteries run out. On most Tesla models, the maximum range is about 200 miles. With the new 100 kWh battery pack, a Tesla Model S will have a range of around 380 miles.

Tesla hasn’t officially announced the bigger battery pack, but Electrek reports that a Dutch blogger stumbled across references to a “100D” Model S while browsing through databases from the RDW, the Dutch authority that says which cars can drive on European roads. So it may not be officially out there yet, but we’re pretty sure a juiced-up Tesla Model S is on the way. Electrek points out that the California Air Resource Board, which serves the same function in California as the RDW does in Europe, hasn’t put the 100D on their spreadsheets yet, but it’s only a matter of time. When the Model S 75D came out, the CARB was the one that spoiled the launch, just like the RDW in this case, so it’s clear that the battery is on the way.

It looks like the Model S is the only car currently getting the 100D battery, but with the crazy production scale of the Tesla Gigafactory we wouldn’t be surprised to see 100D batteries coming out to power new Tesla trucks as well.