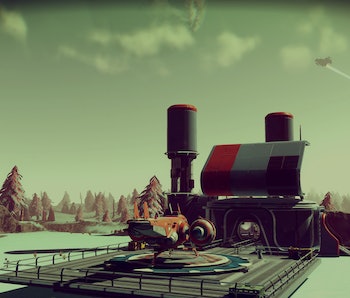 In No Man’s Sky there are different play-styles that reward you for approaching things a certain way with units, bonuses and resources to keep you afloat. Trading is one of the quickest paths to wealth given patience and practice.

Trading is all about taking advantage of the galactic trade network which can be accessed via galactic trade terminals scattered around the map. You’ll typically find these on space stations, trading posts and smaller facilities operated by lifeforms. Each of these locations has their own supply and demand for the various goods you’ll find, as indicated by a percentage next to their name.

As a trader, these percentage values will become your greatest ally and enemy – dictating how you go about your business and what sort of equipment you’ll be marketing for profit.

Regardless of the margin, though, trading in No Man’s Sky is currently focused around two separate paths:

Collecting Your Own Resources

For many players, collecting your own resources is going to be the best way to go. With this strategy, you’ll want to find a system that desperately needs something you can provide. The goal is to then stock up on said item, warp to the system and sell it for profit. Depending on the need, the value may increase or decrease after you’ve begun to sell the item – meaning you’ll have to evolve with the market.

For example, I discovered an ice-covered planet that was covered in venomous spores on the way back to my home system. These spores looked akin to sea urchins and dropped an item called sac venom once killed, which didn’t hold much value in the system I found them in so I didn’t worry about collecting too many. Once I warped back to my home system, I found out they were extremely valued on the space station.

These sac venom items were going for 51,863.0 units per piece — a whopping 96% higher than the galactic average. Within a few hours I had earned 5 million units, upgraded my ship, and continued working my trading route between the two systems.

Going this route will require focus on one resource, though, which can tank in value at any given time. So far, it seems that the economy doesnt alter within a split second, allowing you to work a specific resource for a few hours or days before having to change your strategy. Keep in mind highly profitable resources will almost always be marked with a gold star on the terminal as well.

The second major strategy for trading is to learn about the systems surrounding you and transport goods between them based how their economy is currently operating. This typically involves a more detailed look at each system requiring you to memorize the way their markets operate… but it almost always yields a much greater payout in the end.

In order to get started with your own trading routes, make sure you have a decent sized ship (20+ slots) and a supply of resources to keep your hyperdrive fueled. I’d also recommend naming said systems – that way you can access them quickly instead of navigating the game’s tedious map system.

Once you’ve got a good ship, a set of systems and plenty of fuel it’s time to start trading. The goal here is to find a system that pays highly for an item that another system sells below the galactic average so that you can make a hefty profit and pay to keep your ship afloat through the journey.

One great beginner resource is plutonium, which is used to fuel your ship and equipment. You can easily get your hands on a decent stock by mining it yourself, or purchasing it for a relatively low cost from a system with plenty available. Then, head to a system where plutonium is rare and sell it for a hefty profit. Ideally, you’ll want to develop a trade route with multiple resources that have the same profit margin and keep running it to rack up units.

No matter what strategy you follow, trading in No Man’s Sky can be one of the most dangerous activities to pursue depending on the value of the cargo you’re carrying. Pirates and other convoys will engage you if you have valuable resources on board, and if they succeed in taking your ship down, you’ll come back to find those resources gone.

Make sure to invest some of your hard-earned cash in a ship with plenty of weapon and shield upgrades in order to combat these pirates and profiteers during your travels. Usually they come in waves of 1-4 ships, and are present within space battles you’ll find after jumping across a few different systems in a row. It’s best to try and avoid these, but once you’re close enough you’ll be locked from using your pulse engines or hyperdrive, so be ready to defend yourself.

More like this
Gaming
5.26.2022 6:17 PM
You need to get the most eccentric open-world RPG on PlayStation ASAP
By Hayes Madsen
Gaming
5.16.2022 8:22 PM
PS Plus library includes a rad Red Dead DLC and 7 more secret gems
By Joseph Yaden
Gaming
17 hours ago
Everything you need to know about the Lord of the Rings: Gollum game
By Hayes Madsen
Related Tags
Share: