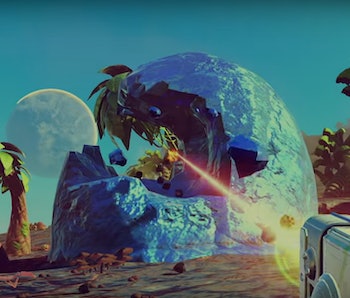 Today’s patch notes for No Mans Sky from Sean Murray of Hello Games read like a litany of the game’s most common issues. Players are having trouble finding their ships, complaining about the hyperdrive, and being unable to figure out how to redeem pre-order bonuses. But the single line about the game’s support infrastructure is what stands out most.

“We will be moving to a ticketed support system next week, and have hired someone to manage this starting Monday.”

Wait, what? What in the ever-loving world were they doing before? Just answering emails as they came in? Far be it from us to suggest how Hello Games should be doing its job — overall, I think the developers have done fantastic in supporting the game, and I’m not privy to any inside information — but not using a ticketed support system for a game touted for it’s basically endless exploration sounds like a total fucking nightmare.

A ticketed support system is super common in technology businesses. If you’ve ever called in to, say, Asus for computer support, you’ve likely experienced one without even knowing it. The jargon changes (case number, support number, ticket number, request ID, and so on) but the underlying system remains the same: you’re assigned a specific identification in order to better track and aid your specific problem.

As someone who has worked tech support, let me tell you that the idea of not having a ticketed support system hurts me on the inside. Depending on the amount of reports they’re getting, I can’t imagine how they’ve been sorting through them for the time being. Assigning them out via email? Some kind of weird Slack integration? Who even knows. Maybe they cobbled a system together that’s worked for them until now, but keeping track of 18 quintillion planets worth of problems, times the number of people playing the game is another thing altogether.