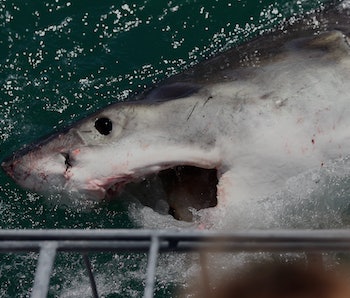 We’re proud of ourselves for living over 100 years, we’re proud of our dogs for living a solid 20 or so, but it’s time to pack it up, because our lifespans have been beaten into the depths of the ocean by a shark, according to researchers. The freckled scavenger known as the Greenland shark can live up to 400 years, meaning that there could very well be one alive that existed during the time of the United States’ founding. What’s most interesting, though, is how this discovery was made.

Marine biologist John Steffensen and a team of researchers from the University of Copenhagen discovered the sharks’ incredible life span when they correlated radiocarbon dates (based around the dates of major nuclear tests in the 1960’s) with shark lengths. The Greenland shark, the team knew, grew at about one centimeter per year, with adult sharks capping out at about 500 centimeters in length. Using that data, they found that one of their older sharks was actually 392 years old, with an additional variable age of 120 years more or less.

The full study was published in Science on Friday, and concludes that the species reaches sexual maturity at roughly 150 years old. Calling the species “large yet slow-growing,” the research concludes that there’s a great possibility that these animals can live beyond 400 years, showing a particular sense of vitality for a shark that can’t mate until they’re over a century and a half old.