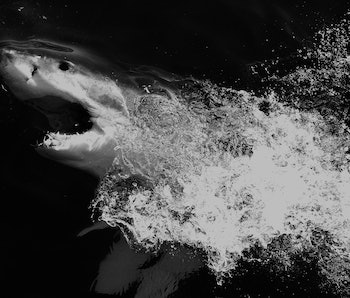 The perception of sharks as wild human killing machine’s hasn’t gone away despite the success of the Discovery Channel’s Shark Week, which, in part, attempts to show the more gentle, peaceful side of these misunderstood sea creatures. The TV program has come and gone, but the Matawan Historical Society in New Jersey is having its own shark week to honor the 100-year anniversary of a shark attack that came to shape our warped perceptions, and how it can be changed in the future.

Before the string of attacks that occurred this week 100 years ago, scientists believed sharks would never attack humans. That was debunked when between July 1 and 12, four people died and one person was injured in shark attacks along the Jersey Shore.

It started with a Philadelphia man swimming off Beach Haven whose thigh was torn apart by a shark, followed by a bellman at the Essex & Sussex Hotel in Spring Lake, whose legs were completely eaten off.

But the worst attacks started on July 12. An 11-year-old boy named Lester Stillwell was skinny dipping off Old Wyckoff Dock when his friends spotted a fin coming out of the water, leaving only a bloody mess where Stillwell once was. W. Stanley Fisher, 24, dove into the water several times to recover Stillwell’s body when the shark attacked again. Fisher battled the shark until its grip loosened and he was able to get away, but the damage was done and he died on a train to the hospital hours later.

These attacks and more during the week caused such a stir locally and nationally that the acting mayor of Matawan, NJ offered a $100 reward (the equivalent of more than $2,200 today) for the corpse of the sea beast. Of course, it’s hard to actually identify which shark committed the killings, if it was even just one shark at all. So, what ensued was just an increase of senseless shark hunts that has prevailed to today.

It doesn’t help that those events inspired the movie Jaws, which set our cultural understanding of sharks for decades to come.

The historical society is commemorating the heroism of those who died trying to save others with a week of events that includes trolley rides, a scavenger hunt, book signings, movie screenings, live music, and the commemoration of a new monument to those events 100 years ago.

Hopefully, the schedule of events will help people learn from the past’s mistakes.

More like this
Science
Feb. 5, 2023
The Plague Is Still Here — And It Could Infect Your Cat
By Tara Yarlagadda
Science
Feb. 1, 2023
Look! Five New Snake Species Discovered in a Habitat Devastated by Mining
By Robin Bea
Science
Jan. 29, 2023
Are coyotes dangerous to dogs and cats? Here’s how to keep your pets safe
By Tara Yarlagadda
LEARN SOMETHING NEW EVERY DAY.
Related Tags
Share: