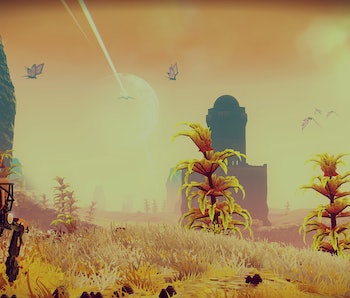 A big portion of No Man’s Sky is spent casting about for the right materials to move forward. You need this isotope to fix this thing, these items to fuel this other bit, and so on. The rarer the item, the more useful it is at progressing through the game to the center of the galaxy. That’s why the recently discovered dupe exploit is so powerful.

As reported by Eurogamer, there’s a method within the PlayStation 4 version of the game (PC launches tomorrow, August 12) where players can use their own death to further propel themselves into the ranks of the richest. All it takes is time, some sneaky save scumming, and a few valuable materials.

All this is possible thanks to the way No Man’s Sky manages save states and how it deals with death. There’s the most recent save, and a previous save, both accessible via the Options menu. And if you’re wandering around in space and just so happen to blow up, the items in your ship are lost to a grave marker, but not those in your exosuit. And that’s where the magic happens.

If you go out and die with rare items in your starship inventory, but reload the specifically labelled previous save, you can go out and reclaim the ship inventory floating around out in space. Boom, duped items. It’s unlikely to be left alone by Hello Games for long, as it goes against just about everything Sean Murray seems to want for players to experience, so now might be the best time to get it done if you’re going to.

More like this
Gaming
6.23.2022 4:00 PM
You need to play the best cyberpunk RPG trilogy on Xbox Game Pass ASAP
By Robin Bea
Gaming
6.21.2022 4:27 PM
Everything you need to know about Crisis Core: Final Fantasy VII Reunion
By Hayes Madsen
Gaming
6.17.2022 4:00 PM
The agony and ecstasy of PlayStation trophy hunting: "It's a huge drop of serotonin”
By Joseph Yaden
Related Tags
Share: