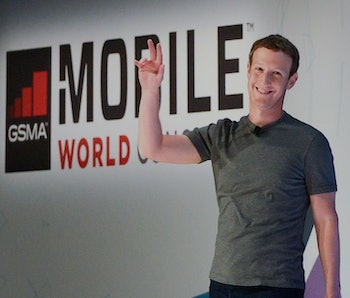 There’s a fight going down right now between an ad-blocking service and the world’s most popular social platform. The short of it: Facebook wants to show ads to people who use ad blockers — shots fired — and one of the most popular ad blockers in the world isn’t happy about it, calling the move “a dark path against user choice.”

Ad blockers have been rising in popularity ever since Apple introduced “content blockers” — ad blockers with some extra features and a slightly different name — with iOS 9. Now the advertising-dependent internet is freaking out and trying to find ways to serve ads to people — even if they have some kind of blocker installed.

Facebook’s solution, as revealed in a blog post on Tuesday, is to give users more control over the ads shown on its site. That way, they’re less likely to encounter obnoxious ads they want to block.

“You can easily customize the ads you see in the news feed,” a cheerful video explains, noting that you “can find personally relevant ads that speak directly to the topics you care about.”

A post by Facebook elaborates: “When we asked people about why they used ad-blocking software, the primary reason we heard was to stop annoying, disruptive ads,” Facebook writes in a post on its corporate blog. “As we offer people more powerful controls, we’ll also begin showing ads on Facebook desktop for people who currently use ad blocking software.” Uh-oh.

That’s where Adblock Plus comes in. The company published a salty blog post — title: “Oh well, looks like Facebook just got all anti-user” — complaining about Facebook’s decision and assuring its users that their precious ad blockers won’t be made obsolete anytime in the near future. With some studies finding that more than 9 percent of all web page loads are done with ad-blocking software enabled, the attempt by Facebook to work around ad-blocking software might piss off a lot of people who want an advertising-free web experience.

“Earlier today, Facebook announced that it would start trying to circumvent users with ad-blocking software and show them ads. This is an unfortunate move, because it takes a dark path against user choice,” Adblock Plus wrote in its blog post. “But it’s also no reason to overreact: cat-and-mouse games in tech have been around as long as spammers have tried to circumvent spam filters.”

Facebook’s decision is just one way companies have responded to ad blocking. Some publishers have banned people from using ad blockers from their sites. YouTube introduced a paid, ad-free version of its video streaming service.

Others have made tools like the Ethical Ad Blocker, which prevents anyone who wants to use an ad blocker from visiting any sites that depend on ads to survive. The point is, reactions to ad blockers vary.

Adblock Plus says it’s on the side of user choice. Yet Facebook called out the company’s business practices in its blog post. Here’s the relevant section:

Some ad blocking companies accept money in exchange for showing ads that they previously blocked — a practice that is at best confusing to people and that reduces the funding needed to support the journalism and other free services that we enjoy on the web. Facebook is one of those free services, and ads support our mission of giving people the power to share and making the world more open and connected. Rather than paying ad blocking companies to unblock the ads we show — as some of these companies have invited us to do in the past — we’re putting control in people’s hands with our updated ad preferences and our other advertising controls.

The Financial Times revealed in a February 2015 report that large companies like Google and Microsoft pay the company behind Adblock Plus to show their ads. Adblock Plus says these new ads have to meet strict standards, but the fact remains that it’s also bypassing ad blocking tools for its own gain.

The end result is the same: Facebook’s going to show ads one way or another. It just happened to pick the option that doesn’t involve paying off an ad blocker.