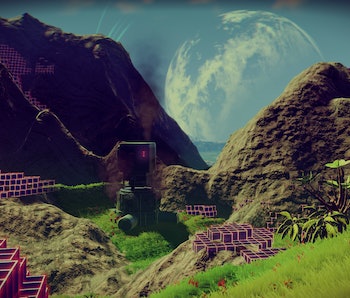 There isn’t a lot of direction when you start No Man’s Sky, the boundless exploration game from Hello Games on PlayStation 4 and PC. Unlike most games that spell out what you have to do, No Man’s Sky leaves you to figure it out on your own. It’s a scary sort of freedom, one that easily overwhelms.

Though the game’s “tutorial” tells you what need to do — fix your ship, fly to space — it doesn’t explicitly tell you how (gather resources) or where to find said resources (plants, caves, rocks). But one of the most useful things you should have up and running is your Multi-Tool’s Scanner, which identifies specific resources in your HUD. Before you even attempt to fix your starship at the start of the game, fix your mineral Scanner — it’ll make things far less of a headache in the first hour of the game. Here’s how.

Get to Know Your Multi-Tools

Upon starting No Man’s Sky, it’s hard not to notice your ship is all kinds of broken and in need of repair. You’ll also see you’ve got a trusty sidearm: That’s your Mining Beam, which lets you collect resources to fix said ship. But what you don’t see right away are your other tools that need fixing. There’s your Analysis Visor that lets you name animals and planets you come across. There’s also your Scanner, which is a giant time-saver if you know how to use it.

But before you can learn how to use it, you need to fix it. Luckily, it’s rather easy: Just look for and mine 25 pieces of Carbon, one of the most common Isotopes in the game. They’re bountiful in trees, plants, and vegetation. Don’t get them confused with Thamium9, however, which is another red isotope found in plants (although it’s a good idea to keep some of those around too, for your starship).

When your Scanner is up and running, now you can use it to find nearby resources which will save you time and frustration looking for elements you need to start traveling. To activate the Scanner, press L3 (holding down the L2 joystick). Once activated, nearby minerals will temporarily show up on your HUD. It won’t last for long, so turn on the Scanner once more if need be. You can only turn on the Scanner a few times before it needs to charge.

With the Scanner up and running, finding resources to fix your ship, recharge your Mining Beam, or even power up your exosuit will be much, much easier.