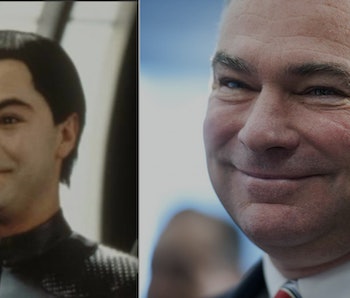 We have a bone to pick with Hillary Clinton’s running mate, Vice Presidential candidate Tim Kaine. He refuses to come out. He refuses to expose what he truly is: an alien cephalopod hiding out on Earth because he was chased off his home planet.

There’s no mistaking it. Kaine is a dead ringer for Teb from Galaxy Quest, the alien who forced to recruit a bunch of TV actors in a Star Trek ripoff to help save his species from an evil reptilian alien villain named Roth’h’ar Sarris. He has the same face, the same mannerisms, the same “awww shucks” sensibility, and — it would seem — the same ability to hide his tentacles.

Yes, Teb is a fictional character played by actor Jed Rees, but hear us out. The fictional characters in Galaxy Quest found themselves in the middle of a very “real” galactic war between a semi-benevolent group of mollusks and evil reptiles, which sounds an awful lot like the current American electoral process. Plus, Sarris is a gigantic bigoted husk of a humanoid ego. The parallels continue!

Just look at Kaine — the grin, those impressions, the hair, the sense of being overwhelmed but still being reassured in his capabilities. You can’t tell us this guy John Oliver affectionately labelled “America’s stepdad” isn’t a Thermian disguised as a human that somehow got into Harvard, took some time off to do some humanitarian work in Honduras (probably to find out what being truly human really means), and eventually settled into diplomatic life as a Senator back in Virginia.

Forget that, in the movie, the Thermians originally approached Jason Nesmith (Tim Allen, aka Commander Peter Taggart) and crew at a convention to help them out, and that Kaine was officially introduced as a candidate at a convention; or that as veep Kaine would be second in command to Clinton just like Teb is second in command to Mathesar. What seals the deal here is that Sigourney Weaver, Lieutenant Tawny Madison herself, made an appearance at the DNC the very night Kaine made his speech as the Democratic Vice Presidential nominee.

Weaver obviously believes Clinton and Kaine will help carry out legislation befitting the offices of the Executive branch should they get elected, and we assume she’s also sympathetic to the Thermians’s plight due to her character’s actions in Galaxy Quest.

This, obviously, is a joke, but the aliens in the movie actually did model their entire society after a TV show. They believed that’s how things worked, and that it was a historical document they were desperate to use to save their species. Even though he’s definitely Teb, Kaine and the Democratic ticket is thankfully modelling their platform on (mostly) real issues instead of mimicking small screen stars.

Galaxy Quest’s politics are ones of inclusion, sacrifice, and friendship. Wouldn’t it be great if life was like that? It could be. Write in Teb.

More like this
Culture
19 hours ago
8 sensational sci-fi shows and movies coming to HBO Max in July 2022
By Robin Bea
Culture
6.25.2022 10:30 AM
You need to watch the most inventive Bruce Willis time-travel movie before it leaves Netflix this week
By Eric Francisco
Culture
6.21.2022 9:30 AM
5 incredible sci-fi movies leaving HBO Max in June 2022
By Robin Bea
Related Tags
Share: