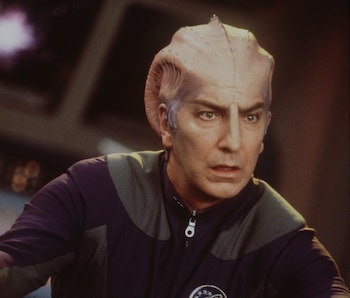 With the world still grieving for Lemmy and David Bowie, the cruel universe has — in its infinite dumbness — snatched up Alan Rickman as well. The Shakespearean actor leaves a cinematic legacy: He’ll always be Hans Gruber in Die Hard, Severus Snape in Harry Potter, and that dickhead from Love Actually. But there’s one woefully overlooked performance in Rickman’s oeuvre, and its continued omission is as criminal as hijacking Nakatomi Plaza. I submit to you: Alan Rickman’s disgruntled Alexander Dane in Galaxy Quest.

You might be forgiven for writing off the 1999 comedy starring Tim Allen. But it was 90 percent fresh on Rotten Tomatoes, and Rickman was a big reason why. The movie follows the has-beens of Galaxy Quest, an analog to Star Trek, and ‘80s/‘90s genre TV. An alien race sees the show, mistakes it for nonfiction, and recruits the cast to protect them from genocide by an evil galactic warlord.

There are a lot of things to love about Galaxy Quest, not the least of which because it’s simply hysterical. For sci-fi nerds, it was a smart cultural satire that had remarkable affection. It wasn’t condescending, uninspired, nor did it pander, basically everything The Big Bang Theory does to wreak havoc. And this was years before the superhero media boom that morphed Comic-Con from a civic center gathering into the densely populated, commercialized disease party it is today.

And Alan Rickman is fantastic.

The London-born actor didn’t have to dig deep to understand Alexander Dane, irate that his legacy will be the one-note Dr. Lazarus, the Spock analog. Like Rickman, Dane was a celebrated thespian whose career made stalled and left him in Hollywood hell, tormented by the doughy nerds who endlessly repeat his catchphrase — “By Grabthar’s hammer, I will avenge you.”

No one who tours conventions for a living will admit it, but the whole thing kind of sucks. Galaxy Quest makes that reality into fodder for humor, and Rickman’s subtlety twists the whole thing into farce. You can feel Dane’s abyss of indignity as he shills for local furniture dealers. You feel for the guy without exactly sympathizing.

But Galaxy Quest celebrates geek culture in ways that other films with related premises, such as Birdman, generally don’t. Rickman embraces Dr. Lazarus when he realizes that silly crap can profoundly resonate with people, or aliens. It’s a beautiful end of an intergalactic Pilgrim’s Progress.

Seeing a man at peace in his own weird corner of time and space is a beautiful thing indeed.