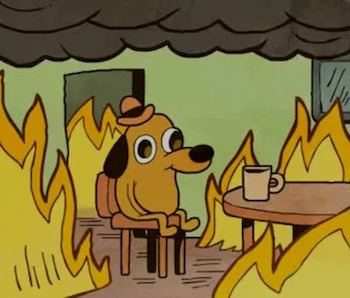 A courageous (or insane) dog calmly sat at a burning table, sipped a beverage, and proclaimed: “This is fine.” And the world was changed forever. This happened for the first time — it has happened Groundhog Day-style ever since — in early 2013. Artist K.C. Green published a comic titled “On Fire” for his webcomic series Gunshow. You saw it shortly thereafter on Tumblr, Imgur, Twitter, or Reddit. The image of placid canine in a burning house became a popular meme and an anti-rallying cry for the apathetic net.

Some people aren’t aware that the comic actually continues beyond the first two panels, where the dog sits down and later utters its famous phrase, “This is fine.” The full six-panel comic doesn’t actually end well for the dog. It wasn’t fine at all.

The popular usage for the image is usually in response to some catastrophic or terrible event. A nightmare situation is represented by the fire, and the dog represents the image poster as they either choose to ignore or accept their hell-fire situation. Depending on one’s perspective, the comic could be interpreted as a form of purposeful psychosis, or zen meditation.

If a person chooses to interpret the image as the former, it means they’re willfully ignoring a dangerous or destructive situation, simply because it’s too much to handle. In the case of the latter, the image takes on a more reserved connotation, in line with the “go with the flow” philosophy of Bruce Lee.

The meme quickly spread beyond the confines of static reaction images, though. In 2015, Adult Swim contacted Green about animating “On Fire” as a TV bumper. Green agreed and collaborated with animator Shmorky to produce it. Dana Snyder voiced the “This is Fine” dog, and the bumper made its way online in early 2016.

Green went on record to say that seeing the image freely used by internet users and corporations comes with the territory of being a webcomic artist. However, things took a strange turn during the 2016 Democratic National Convention.

On July 25th, 2016 the official twitter account for the GOP tweeted out Green’s comic as their reaction to the first day of the DNC in Philadelphia, Pennsylvania.

The tweet was quickly savaged by Twitter users for a variety of reasons. First, that it was a humorous and misguided attempt by the GOP at relating to “the youth.” Secondly, the week before, the GOP nominated Donald Trump as their party’s official Presidential nominee.

Online political cartoon and comics journalism website, The Nib, contacted Green about the GOP’s use of his comic and together published a response to the GOP’s tweet.

Additionally, Green went online and posted a series of tweets with his personal opinion on the GOP using his image for their own political reasons.

What began as an internet meme used to convey existential dread between the internet-savvy populations, became strangely political.

Three years after the release of the comic, Green launched a Kickstarter in August 2016 for an official plush of “famous.dog.” The campaign begins with a $25 pledge which will land backers the plush, and goes to up to $275 which will net the backer ten dog dolls, plus additional goodies. Green warns backers to not set their dog on fire for legal reasons.

However, famous.dog’s fate was not resigned to become official merchandise (of which there are already t-shirts and mugs Green sells on his personal online store). Green partnered with The Nib again to publish and update to “On Fire”, titled “This is Not Fine”.

Where the dog once sat idly by as its house, life, and existence became consumed by the fires, it finally reacts to the situation. Screaming, the dog rushes to put out the fire, confused how it could have let things come this far. The dog questions its own sanity, decrying the killing of Harambe. After the fire is out, it cries alone in the burned house.

The unofficial mascot for perseverance (or delusion) in the face of adversity has finally had enough. “This,” the famous dog says, “is not fine.” Not anymore.