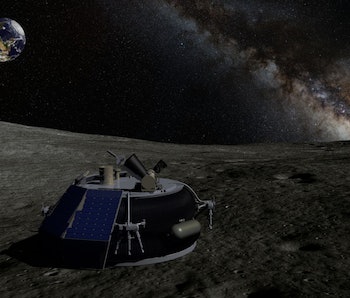 The U.S. government announced on Wednesday that it’s cleared Florida-based company Moon Express to send a robotic lander to the moon in 2017.

It is the first time the U.S. government has approved a private space mission to the moon — let alone a trip beyond Earth’s orbit. If successful, the Moon Express robotic mission will be a major step forward for the advancement and expansion of private spaceflight.

Four months ago, Moon Express formally requested permission from the Federal Aviation Administration to launch a spacecraft to the moon as a part of its bid to win the $30 million Google Lunar XPRIZE competition.

Moon Express CEO and founder Bob Richards has called the moon the “eighth continent,” and has not been shy about promoting the company’s larger vision of commercializing the moon and turning it into a new platform for scientific research and mining for minerals and other valuable resources — including water.

The mission, as approved by the Federal Aviation Administration’s Office of Commercial Space Transportation, will send the MX-1E — a 20-pound suitcase-sized lander that will “hop” across the surface — to the moon for a two-week mission next year. The one-way trip will send over a slew of scientific experiments, and instruments to send pictures and videos of the surface back to Earth.

“Where could you come up with a business case for an exploration mission?” Richards asked in April during a talk at the SETI Institute. Mars was out because there’s not yet “practical economics” of visiting the red planet. So he turned his attention to the Moon.

“Economically, as Earth’s eighth continent, it’s a place that we can aspire to learn how to become a multi-world species,” Richards said then. “It’s a place that’s not that far away.”

The long-term goals for Moon Express are to continue to launch more lunar missions that will, hopefully, culminate in the retrieval of lunar material back to Earth by 2020. Before that, however, Moon Express wants to nab the $20 million in grand prize money, and in order to win the Google Lunar XPRIZE, the company must land MX-1E on the lunar ground before December 31, 2017. Moon Express had already booked a ticket on an experimental rocket called Electron (made by Rocket Lab), but it’s still totally unclear when that launch will occur. Right now, only one other team, Isreali-based Team SpaceIL, has also reserved a lunar launch contract.

The outstanding issue was still whether they would get the FAA’s permission to fly to the moon. Because there was no legal and regulatory framework for how to approve or disqualify commercial missions to places beyond Earth’s orbit, Moon Express decided to work around this by essentially sharing more information with the federal government than it needed to.

The company submitted a payload review to the FAA in the spring in which it put forth specific arguments as to how it would adhere to the Outer Space Treaty. Along these lines, Moon Express demonstrated it would comply with three critical Outer Space Treaty rules: it would allow the government to continually monitor the MX-1E mission; it would not disturb other nations’ spacecraft or missions (meaning, no ramming into old Apollo landers and whatnot); and it would not contaminate the moon with life from Earth.

The U.S. government has taken a step forward in approving asteroid mining and limiting industry regulations as companies develop the necessary tech for such mining operations, but there is still a severe dearth in establishing exactly how gets to travel into deep space and who cannot. The announcement paves the way for the FAA to establish that legal framework.

This is crucial, since other companies are well under way in developing their own missions to other worlds. Elon Musk, founder of SpaceX, has been explicit about his company’s plans to send its Red Dragon spacecraft to Mars by 2018. That company will also need FAA approval to fly to the red planet — and the new Moon Express approval is a very encouraging sign SpaceX will get it.